What the heck is going on with Page Titles over at Google?!

Posted by Owen Powis on 15 Sep, 2021
View comments SEO
It’s been almost a month since Google rolled out changes to how the title tag works. If you’re just spitting out your coffee thinking ‘what changes?’ that’s because Google did so with little warning or explanation. So pretty much the same as usual.

We covered the changes at the time. However as things have unfurled and we now have a clearer picture of the situation, it’s worth going into this in a little more detail, and we can answer some of the questions around what this change is and the effect it’s had. 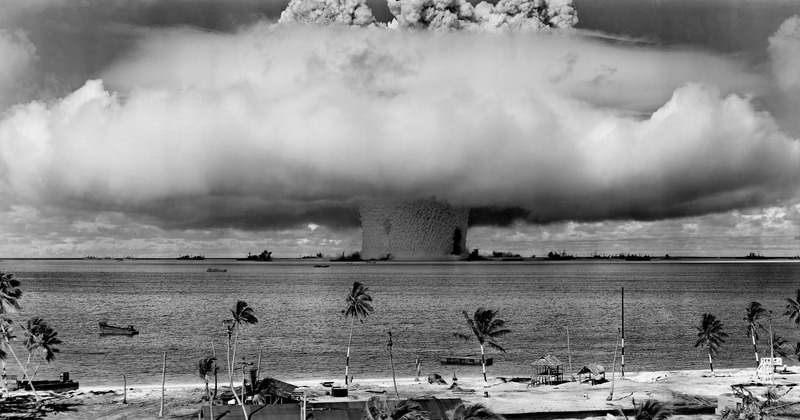 On August 16th people started reporting that Google was doing weird things to the results for their sites, with many pages not showing the correct title in the results. It’s nothing new for Google to be making changes to the title tag. If Google doesn’t like the title tag you entered it will provide one it feels is more suitable.

However this is usually a result of specific queries where the content may have matched but the title didn’t. It made sense that in this situation, or where the title was very poor, Google would step in and provide a version that was a better fit for the query.

Because Google has been making these sorts of changes to title tags for a while the update was harder to prove and this caused a bit of back and forth in the SEO community. Which is why many people were waiting on Google’s confirmation before taking any action.

Google obliged on the 24th of August with their aptly named blog post, An update to how we generate web page titles.

Last week, we introduced a new system of generating titles for web pages. Before this, titles might change based on the query issued. This generally will no longer happen with our new system. This is because we think our new system is producing titles that work better for documents overall, to describe what they are about, regardless of the particular query.

Also, while we've gone beyond HTML text to create titles for over a decade, our new system is making even more use of such text. In particular, we are making use of text that humans can visually see when they arrive at a web page. We consider the main visual title or headline shown on a page, content that site owners often place within <H1> tags or other header tags, and content that's large and prominent through the use of style treatments.

Other text contained in the page might be considered, as might be text within links that point at pages.

Hold on… what was that last sentence…?

Other text contained in the page might be considered, as might be text within links that point at pages.

OK, let’s take a closer look at what Google is saying:

Before this, titles might change based on the query issued. This generally will no longer happen with our new system.

This is referring to how Google would previously treat page titles, which was tweaking them based on the user's query. This is a significant change in itself as Google is saying they are no longer going to be doing this. Instead it appears they are going to be identifying a single ‘canonical’ page title, and everyone will be getting that no matter what the search.

To me this comes across as a strange move in the midst of their other updates such as BERT and MUM. These are focused on freeing up content from specific word combinations as keywords and instead understanding the search intent. Yet they are taking the page title and making it the same no matter what the search is. It’s like there is an element of dissonance within the different parts of Google search and they’re not quite in harmony with this change.

The next part is, unfortunately for everyone, not quite true…

This is because we think our new system is producing titles that work better for documents overall, to describe what they are about, regardless of the particular query.

In short, this hasn’t worked. There are plenty of examples of pages with far worse titles being shown in the results: 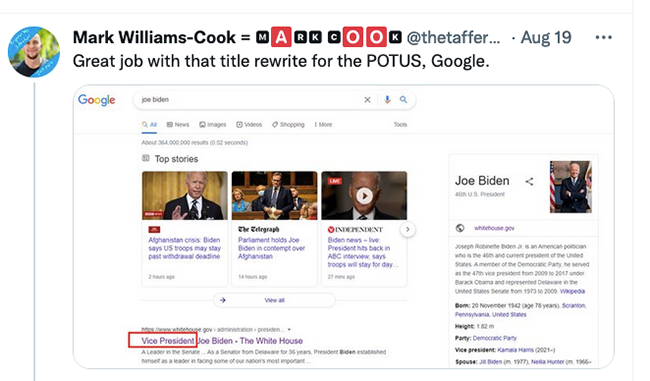 If they can’t get the POTUS right on his official page, that’s a little worrying. They have at least now corrected this error:

It’s now displaying a more accurate title than what it had before. It’s worth noting how it differs from the actual <title> tag:

So where is Google getting this new title from? It doesn’t appear anywhere on page or in the page code:

It's not completely new that Google would make these sorts of changes. Where the content didn't match the query Google would rewrite it. But in this case it does appear to match. Also, where are they getting this content from? It may be the case that it’s from an internal or external link pointing at the page, or perhaps Google tweaked this specific result after it was used as a flagship example of the new system failing.

It’s this ambiguity which makes this even more problematic. In the old system it was fair to say that Google generally changed the page title when it was in the site's best interest. For instance when they no longer matched the search or because the titles were very poor.

If you had a page that wasn’t displaying the right title, it usually meant your title tag needed work. With the right changes you could get it showing what you wanted.

If you’ve ever worked with large brands or companies within certain sectors you’ll know how important this is to them. Often companies will have dedicated Brand and Legal teams who will both want to clear any changes to page titles, and there may even be legal implications for showing incorrect information within these.

Removing this control from companies that really need it is not a good idea. It’s also something that Danny Sullivan appears to agree needs changing:

Overall, we've already said we've heard the feedback and, in fact, have already made changes based on that. This work isn't done, as we said in our post: https://t.co/y28h5y8fnC

Google appears to have forced a solution to a problem that wasn’t there. Having done so they are now forced to try and create a proper solution.

Google seemed to be on a trajectory towards treating the meaning of content as increasingly dynamic, depending on the searcher's intent. So the same piece of content might appear in the results for searches with vastly different keywords but similar intent.

This is how page titles used to work generally. It made sense that if Google was showing a set of results where one used none of the words from the search, that Google would then rewrite the title of this result to be more fitting and likely obtain a higher CTR.

This change appears to be a giant leap backwards on this front: picking a single page title for the page and showing the same one across all searches, without giving the content owner any way of identifying why that particular title has been chosen or refining it.

Something I have been interested in seeing is if this change affects the SEO impact of the page title. So if Google rewrites the title, do they ignore the keywords that appeared in it originally?

John Mu confirmed this has not changed.

Oh, i have to read the whole question? That's awkward.
This just changes the displayed titles, it doesn't change ranking or takes anything different into account.

Overall it’s hard to say why Google made this change and how it thought this would be a beneficial solution. Usually with the updates Google rolls out you can see the overall direction it is pushing in. This feels like a counterproductive change for Google, users and webmasters.

One possibility is that Google has done this in order to start separating out the search result from the content. So that the result Google shows becomes a separate entity from the title and description tags used on page. Over time, these will transition into non-SEO elements.

This is a direction that aligns more with MUM, and severing that connection gives Google total contral of the results. It actually makes a lot more sense when viewed through the lens of their Google MUM post.

MUM has the potential to transform how Google helps you with complex tasks. MUM uses the T5 text-to-text framework and is 1,000 times more powerful than BERT. MUM not only understands language, but also generates it.

It's worth remembering what the future of search might look like to Google. It may well be one in which they don't use or rely on any user generated text within the search results.

Google's post does detail some of the reasons why they may have chosen to rewrite a page title:

Why not just always use the HTML title tag? For the same reasons we explained when we began going beyond the tag significantly back in 2012. HTML title tags don't always describe a page well. In particular, title tags can sometimes be:

Overall, our update is designed to produce more readable and accessible titles for pages. In some cases, we may add site names where that is seen as helpful. In other instances, when encountering an extremely long title, we might select the most relevant portion rather than starting at the beginning and truncating more useful parts.

One of my problems with this and why I haven't focused on it, is that there is no change here from their old guidance. No matter how much Google tries to pretend it's all the same and nothing has changed, we can see the results clearly have changed. Simply reiterating the old guidance isn't enough if things are working differently behind the scenes.

For now a great place to start is our extensive guidance on how to write good page titles. The rules here haven't really changed. It's about creating a unique title that best describes the page. If you see that your title has been rewritten, take a look at what Google is putting there in its place. Create a page title that serves the purpose you need from an SEO perspective and also gives the best possible search experience.

As I think it’s unfair to only highlight problems without proposing solutions, here’s mine

Google has implemented this change because it believes that some webmasters struggle with title tags and it wants to improve the overall quality of the search results. So in that case, implement a proper toolset in Google Search Console highlighting page titles that need improvement and showing the suggested title.

The user can now rewrite the page title in GSC, where Google can show whether it would use it or not. The user can then find a title that works for both them and Google, can take that to Brand and Legal for internal approval if needed, and then implement on site knowing that it will be shown as intended.

You then have no issue with webmasters blindly implementing a ‘do not change my titles’ rule, and SEO’s will actually have a way of understanding what Google wants from a page title. Everyone wins.

Owen Powis Published this article 15 Sep, 2021
Owen Powis is the CEO at Wordtracker and has spent his career working in the digital marketing sector. That time has been spent working at some of the UK's largest agencies dealing with clients ranging from SMEs to large blue chip organisations. With hands on experience ‘at the coal face’, multi-channel marketing is of particular interest, with a long-running bias towards SEO.