Posted by Edith MacLeod on 31 Aug, 2021
View comments Search News
A change to the way Google generates web page titles in search results listings has caused quite a stir. We unpack what’s happened and what you need to know. 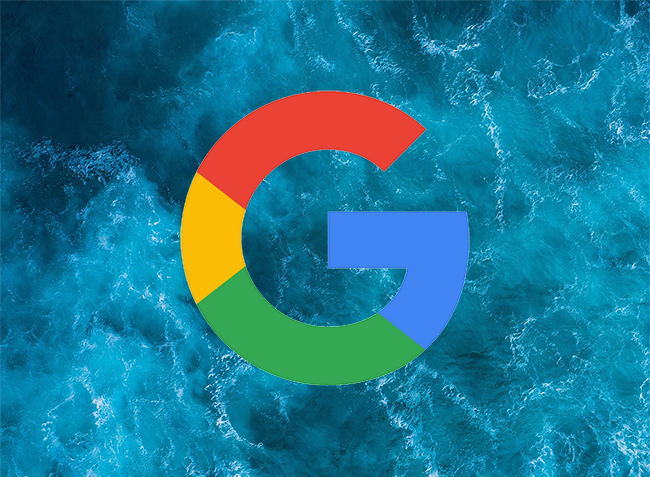 There’s been a fair bit of commotion over a change Google has recently made to the way web page titles are generated in the search results. The change was first reported on 16th August, with SEOs noticing that Google had started rewriting title tags in the SERPs for some pages, replacing the text with other, relevant text from a webpage.  In most cases, Google was pulling in text from H1 tags, but people also reported other sources.  SEO Lily Ray, for example, wrote about anchor text from an internal link being used.

On 24th August, Danny Sullivan confirmed there had indeed been a change to the way Google creates web page titles in the search results. Google making changes to HTML title tags is not new, but the changes were usually smaller tweaks.

“Last week, we introduced a new system of generating titles for web pages. Before this, titles might change based on the query issued. This generally will no longer happen with our new system. This is because we think our new system is producing titles that work better for documents overall, to describe what they are about, regardless of the particular query.”

Google is now making use of other relevant on-page text that a person can see when arriving at a web page.

“Also, while we’ve gone beyond HTML text to create titles for over a decade, our new system is making even more use of such text. In particular, we are making use of text that humans can visually see when they arrive at a web page.

We consider the main visual title or headline shown on a page, content that site owners often place within <H1> tags, within other header tags, or which is made large and prominent through the use of style treatments.”

Other text may be used when a page’s HTML title tag isn’t up to scratch, not describing well enough what the page is about.

Examples of poor title tags include those which are:

“Overall, our update is designed to produce more readable and accessible titles for pages. In some cases, we may add site names where that is seen as helpful. In other instances, when encountering an extremely long title, we might select the most relevant portion rather than starting at the beginning and truncating more useful parts.”

“HTML title tags is still by far the most likely used, more than 80% of the time”.

This means you shouldn’t make any drastic changes, or focus less on optimizing your title tags - also because Google is already in the process of making refinements to the new system.

On 28th August, Google’s John Mueller clarified on Twitter that rankings were not affected by this change.

“This just changes the displayed titles, it doesn’t change ranking or takes [sic] anything different into account.”

Danny Sullivan tweeted in response to a question about how often a page title would be refreshed, that the new system was dynamic and reactive to changes. This means replacement texts chosen by Google for a web page title would not be irreversible. If you changed and improved your HTML title tag Google would react to the on-page change and take this into consideration.

There’s been a lot of coverage online of SEO’s frustration at the disruption caused by the changes, with some sites seemingly losing traffic due to poorly rewritten titles in the SERPs.

SEO Lily Ray attributed one client’s loss of traffic to this: 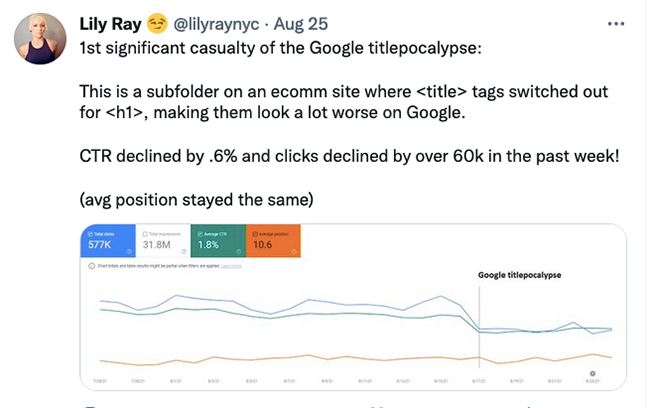 Others pointed out that there are many industries such as pharma, in which all wording needs a meticulous and lengthy approval, and where this could present a real problem.

It seems a relatively small change has caused a big commotion and Google is having to play catchup in providing information and guidance.  Danny Sullivan apologised on Twitter, saying ideally they'd have liked to keep people better informed.

Google is now actively seeking feedback on this change, adding, "we're already making refinements to our new system based on feedback”.  Feedback can be submitted via this forum.

Edith MacLeod Published this article 31 Aug, 2021
Edith MacLeod works in Wordtracker's Community and Content team. With a background in languages, in previous roles she has worked as a translator and interpreter and as a news editor, before moving into the world of SEO.

A small business guide to starting a newsletter [infographic]

Posted by Wordtracker on 21 November 2022