The ACCC moves to force Google and Facebook to pay publishers, but can they win the Content Wars?

Posted by Owen Powis on 5 Aug, 2020
View comments Search News
In what Google and Facebook likely consider a blow and a win for publishers, the Australian Competition and Consumer Commission (ACCC) has released its draft of their new Code of Conduct.

Large digital platforms have been waging war on publishers making it increasingly difficult for them to effectively monetise their content. This is at a time when publishers are fighting to survive the switch from print and TV to digital.

In Australia the ACCC has released a new set of mandatory measures which take direct aim at these platforms.

In this they outline a plan to make Google, Facebook and other search engines and platforms pay publishers directly for their content. This states that media companies should be able to negotiate payment for their content directly with Google and Facebook.

Tellingly, the ACCC was originally tasked with working with Google and Facebook in 2019 to create voluntary codes of conduct. However they decided that this was not going to work:

In April 2020, at the request of the Government, the ACCC provided a progress report indicated the core issue of payment for content was highly unlikely to be resolved through this voluntary process.

They realised that to enact a meaningful change this would need to be made mandatory, in fact they said:

“The final report first identified this fundamental bargaining power imbalance between Australian news media businesses and Google and Facebook, and recommended the introduction of industry codes of conduct.”

This is significant for everyone

Up to this point Google operated in Australia in this regard in much the same way as they do in the rest of the world: by taking content from publishers and displaying it in their own news feeds. Meaning that publishers are not being properly rewarded for their work.

This is the problem with the monopoly of the search market by one company.

Diversifying our choice of search engine is one thing we can all do to help resolve this problem, but it also needs Government intervention to give publishers, as the Australian Treasurer put it, “a level playing field to ensure a fair go”.

So how will the Australian system work?

In short, if you are a publisher with a revenue in excess of $150,000 AUD then you can submit a request to a digital platform to negotiate under the code. This triggers a three-month window to do so and if you cannot agree then it proceeds to arbitration which is binding for both parties.

Userfully the ACCC has published an infographic of the process: 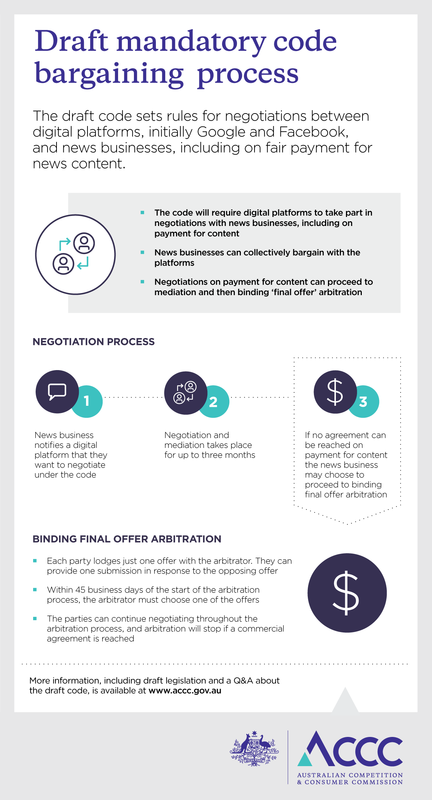 This isn’t a perfect solution by any means. Publishers under $150,000 in revenue will not be eligible under the scheme, meaning an even greater competitive advantage.

“Media businesses would be eligible if the online news content they produce investigates and explains issues of public significance for Australians; issues that engage Australians in public debate and inform democratic decision-making; or issues relating to community and local events."

Publishers must adhere to minimum levels of professional editorial standards, and maintain a suitable degree of editorial independence; operate in Australia for the main purpose of serving Australian audiences; and generate revenue of more than $150,000 per year.

The code is not intended to capture any non-news media content, such as drama, reality television, entertainment content or sports broadcasting.

It appears to be aimed at protecting traditional print and TV news media's transition into digital media, and highlights specifically that this is only for news content.

It’s not just about payment

The code requires Google and Facebook to give a full 28 days notice of any algorithmic changes likely to affect news publishers.

I didn’t find specifics on how this would be done, but it could be interesting for everyone if they start doing this publicly:

“Under these standards, digital platforms would be required to give news media businesses 28 days’ notice of algorithm changes likely to materially affect referral traffic to news, algorithm changes designed to affect ranking of news behind paywalls, and substantial changes to the display and presentation of news, and advertising directly associated with news.”

But that’s not all. They also need to give publishers the user data they collect while people are looking at their content on the platforms. This could open up a wealth of new data for these publishers.

It might also solve the sampling issues many news platforms have with Google Analytics as the vast number of daily visits easily outstrips the 10,000 user sample allowance.

The imbalance that this proposal addresses is one that the EU's Link Tax was passed to address in June 2019.

You may well be wondering what has happened to that, as very little seems to have changed. That’s because member states have until June 2021 to enact it and with the UK leaving the EU it’s not currently clear if they will still be doing so. That’s crucial as the UK’s digital market is the most closely tied with the US, so if there is a disparity between the two this is where it will become the most obvious.

The effects of GDPR and greater copyright restrictions are already felt by lots of UK residents when they try to access US content and find it blocked on either of these grounds.

Whether you are an Australian publisher or not you may well benefit from this ruling, in the same way that the Link Tax may well have a deeper reach beyond the EU.

These measures help to guide Google towards a fairer system and show that Governments will push back. Hopefully this will make them more aware, globally, of the disparate relationations between publishers and platforms.

If Google wants to continue to answer more questions on the search page, pulling more information from publishers and their clicks with it, then there must be a model put in place to push value back.

One that might work for smaller businesses could be to include an automated mechanism for paying publishers through Google Publisher Centre and Search Console. Where content is pulled into the search page, be it through News, Knowledge Panels of any of the other increasingly rich results Google is serving, the publishers of that content get paid a per impression fee.

The difficulty is that often publisher content is used to create a ‘no click’ page where the information is presented without requiring the user to go off page. There is no ad revenue from that page to pay out, it just serves to make Google more useful and keep people using it, as well as benfitting them from the training material for their AI programs.

So the benefit to Google is there, but it needs to be passed on to the publishers. And not just for news results, but for any content that Google is using to show the user the answer to their query within the SERP.

Google's shift from connection to information is something I have written about before, when they revamped how snippets work. Google used to be a map that was used to navigate to the right content. The more that model changes to Google being ‘the content’ the more we need measures to make sure the people that created that content are actually being paid for it.

Owen Powis Published this article 5 Aug, 2020
Owen Powis is the CEO at Wordtracker and has spent his career working in the digital marketing sector. That time has been spent working at some of the UK's largest agencies dealing with clients ranging from SMEs to large blue chip organisations. With hands on experience ‘at the coal face’, multi-channel marketing is of particular interest, with a long-running bias towards SEO.