Could 2018 be the year things went really wrong for Google?

Posted by Owen Powis on 12 Dec, 2018
View comments Search News
With Google's use arguably being increasingly driven out of necessity rather than choice and Google taking on increasing criticism over privacy concerns… could 2018 prove to be the turning point?

This bug affected over 52.5 million people, which means that 1.25% of the total population of the planet, with internet access (~ 4 billion),  were affected. That’s a staggeringly huge number of people. And it’s the second major breach in an all but disused service barely anyone realises they are still signed up to in the first place.

By the way, if you'd rather not wait for the next 4 months for Google to close down Google +, you can delete your profile right now. Just log in at https://plus.google.com then go to settings on the left hand menu, scroll to the bottom of the page and choose the delete your account option. 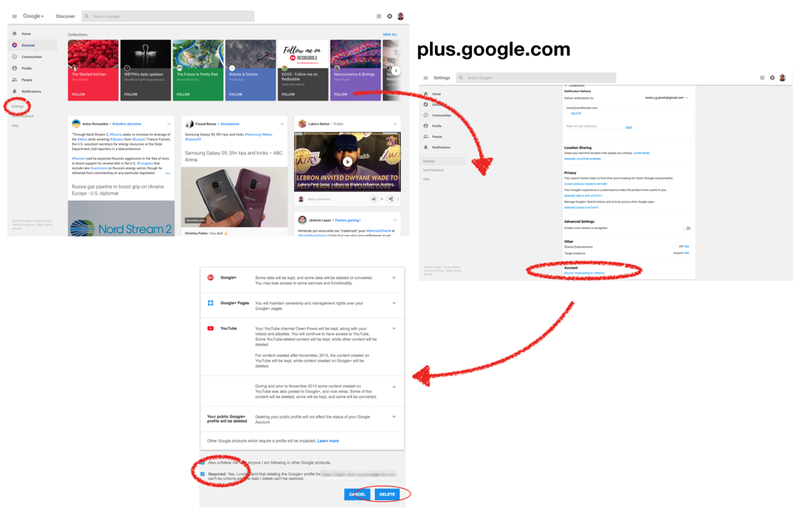 The way Google has dealt with this data breach has at least been slightly more transparent than the last breach, which they covered up for months in order to avoid the spotlight, which was at the time focused on Facebook and Cambridge Analytica.

Personal data isn’t just accidently leaking out of unwanted services, but also purposefully being channelled out of your mobile device. Android is a major service for Google and forms a key part of the overall Alphabet offering. Android is part of a device that you’ll always keep on you, that can track your location, that sees your travel plans and browsing habits. Our phones are so intimately so connected to our lives they have the opportunity to collect a wealth of data about us.

It’s because of the vast range of services which Google offers that it has so many different digital touchpoints, allowing it to collect multiple data points. As consumers become increasingly savvy and privacy becomes a bigger concern this may mean trouble for Google, with users looking towards platforms which collect less data. Within mobile there are really only two options and comparing the amount of data which Android collects next to IOS, the choice may be clear for consumers: 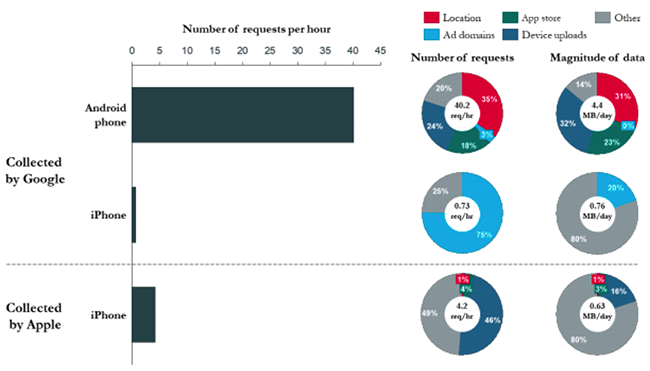 Google has also had some major internal disputes over its products, such as Project Dragonfly, the rumoured censored version of the search engine they are developing especially for China.

According to The Intercept this will block subjects such as ‘human rights’ and ‘democracy’ as well as removing entire websites from the results such as the BBC and Wikipedia.

“Documents seen by The Intercept, marked “Google confidential,” say that Google’s Chinese search app will automatically identify and filter websites blocked by the Great Firewall. When a person carries out a search, banned websites will be removed from the first page of results, and a disclaimer will be displayed stating that “some results may have been removed due to statutory requirements.” Examples cited in the documents of websites that will be subject to the censorship include those of British news broadcaster BBC and the online encyclopedia Wikipedia.

The search app will also “blacklist sensitive queries” so that “no results will be shown” at all when people enter certain words or phrases, the documents state. The censorship will apply across the platform: Google’s image search, automatic spell check and suggested search features will incorporate the blacklists, meaning that they will not recommend people information or photographs the government has banned.”

This has triggered massive walk outs in offices across the UK, US, Hong Kong, Europe and elsewhere. Staff have also written an open letter declaring thier opposition, stating;

"Our opposition to Dragonfly is not about China: we object to technologies that aid the powerful in oppressing the vulnerable, wherever they may be"

This speaks to a pretty fundamental principle held by many who work in tech. There are huge numbers of people this is a serious problem for and they simply don't want to be part of the process.

It's also drawn the ire of Amnesty International. An organisation dedicated to 'standing up for humanity and human rights' to cheerily declare in a spoof Google recruitment ad that to work at Google you would need "absolutely no morals and be happy giving up people's personal data.". This danger here is this serving as a kind of moral filter for Google staff, with those who object leaving and taking with them the moral guidance to steer the company away from these types of projects, and leaving those with no objections to run things.

It's not just the public and Google's own staff which are starting to object to some of their practices. Governments are now choosing to act at a national level. In France the National Assembly and Army Ministry have declared that they would stop using Google as the default search engine on all digital devices. Instead replacing it with QWANT. A French / German search engine with a focus on privacy.

The EU also issued Google with record breaking fines this year of $5 billion for its anti competitive behaviour with Android, following hot on the heels of their fine for similar antitrust behaviour in 2017 concerning Google Shopping.

Now Australia’s Competition Regulator is looking at measures to force Google to unbundle Chrome from Android, so it no longer comes pre-installed. This is just one more of the many measures which are being enacted at the governmental level against Google and its near monopoly of so many markets.

Meanwhile in the US Google’s CEO Sundar Pichai has been called before a Congress Hearing such is the concern over the direction that Google is heading in, with projects such as Dragonfly high up on the list of questions for him.

Google continues to launch more products, such as Google Home, which sold 5.9 million units in Q3 of this year, giving them increasing access to our personal data. This is yet another market which carries a potential wealth of personal information and holds little competition. Google is already only narrowly behind Amazon - the only other serious player - and showing massive growth to get there. 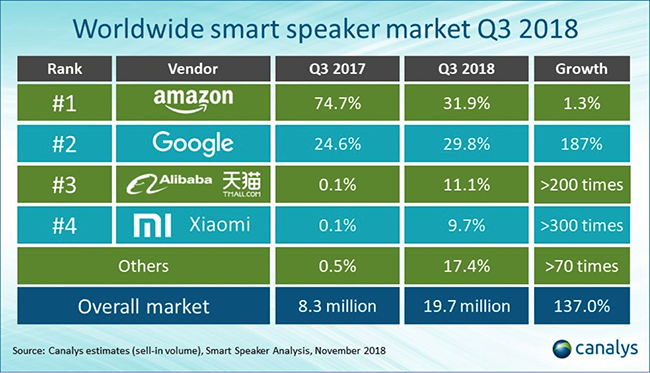 Google is also continuing to make inroads into the video streaming market with YouTube. There is a single clear competitor here - Netflix - and as cable and broadcast decline and YouTube expands its services, we see the same pattern emerge as in the Smart Speaker market, with Google rapidly increasing its share. 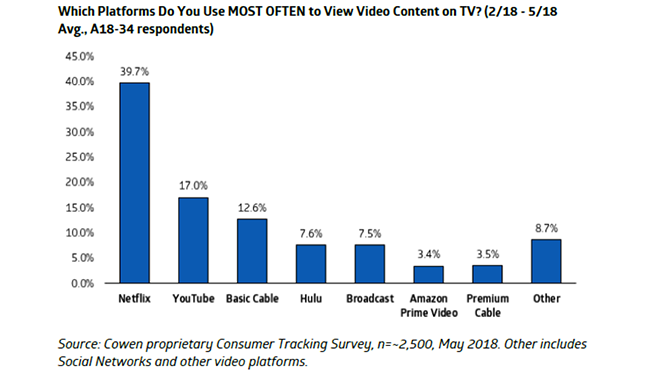 Google is far from infallable, with one of the most obvious examples of where it repeatedly ran into problems is with their various failed social media attempts. Check out this timeline of Social Media highlighting Google's efforts over the years, starting with Orkut: 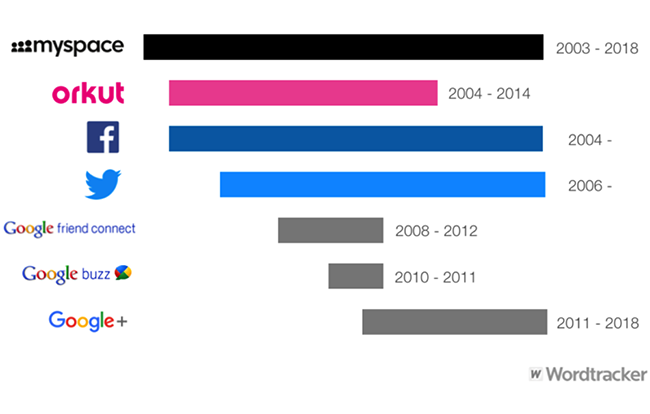 Even Google’s own employees gave up using its social products a long time ago. All the data is available from the plethora of products within the Google ecosystem. It might be the lack of success in Social however which has driven them to seek additional touchpoints to collect data from, leading to the current privacy concerns.

Looking at where Google has been successful, if public opinion turns against them, they could be in big trouble. Markets that are ready to be disrupted generally share two key qualities. One is a lack of competition, so 80%+ of the market is held by a handful of competitors. The second is that the market’s own consumers are not happy with the current solutions on offer.

As Google dominates so many markets with little competition it would seem that it only needs to continue to ignore the protests of its own users (and staff) in order to itself be ripe for disruption. If it doesn’t act to restore consumer confidence, it does beg the question: could privacy concerns combined with reguatory measures on a Government level combine to form the tipping point for Google?

2019 will show which direction they plan to head in and how they choose to tackle challenges seen internally such as Project Dragonfly and the rifts these appear to be causing within Google. Especially as the idea of Digital Sovereignty and various governments’ concern over the monopoly of their citizens data, may see Google's services being restricted and replaced as defaults in more countries.

Owen Powis Published this article 12 Dec, 2018
Owen Powis is the CEO at Wordtracker and has spent his career working in the digital marketing sector. That time has been spent working at some of the UK's largest agencies dealing with clients ranging from SMEs to large blue chip organisations. With hands on experience ‘at the coal face’, multi-channel marketing is of particular interest, with a long-running bias towards SEO.