Looking for a search engine that's not Google?

Posted by Owen Powis on 24 Jul, 2018
View comments Search News
Google, the ubiquitous, the all-powerful, the seemingly insurmountable. But hold on, they really aren’t the only player in the game. Let’s look at some of the alternatives. 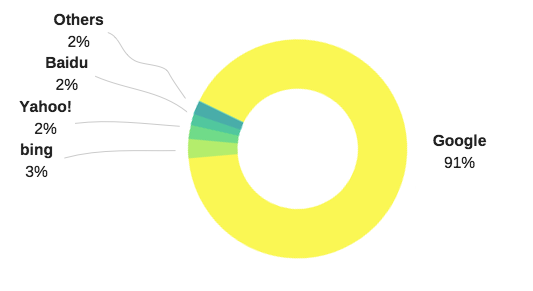 All market share data in this post is taken from the figures at : http://gs.statcounter.com/search-engine-market-share and graphs made in Canva

In light of the recent record breaking antitrust fine of $5 billion handed to Google from the EU for their anti-competitive behaviour, we thought we’d have a peek at just what the competition looks like. So here’s our rundown of English language search engines which aren’t Google!

If you thought Bing was down and out you thought wrong. They are still going strong and actually hold a significant proportion of the market. In fact if you factor out Google then they hold the lion's share: 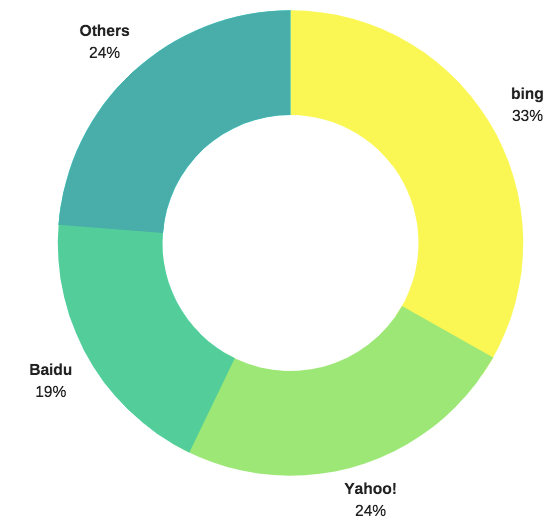 Bing have put a lot of work into their search results, including adding in new formats and using increasing amounts of AI driven results. 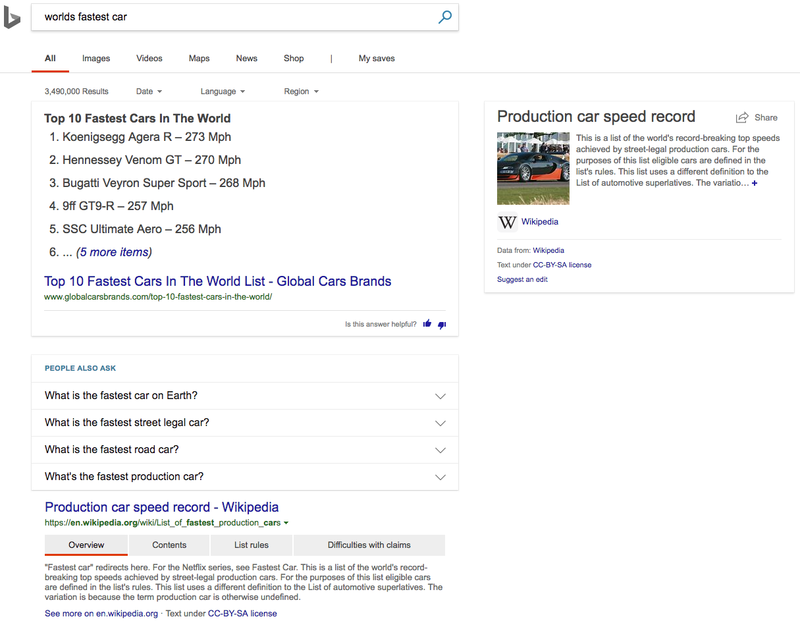 The hard work appears to be paying off, with Bing’s market share on the rise over the past 12 months: 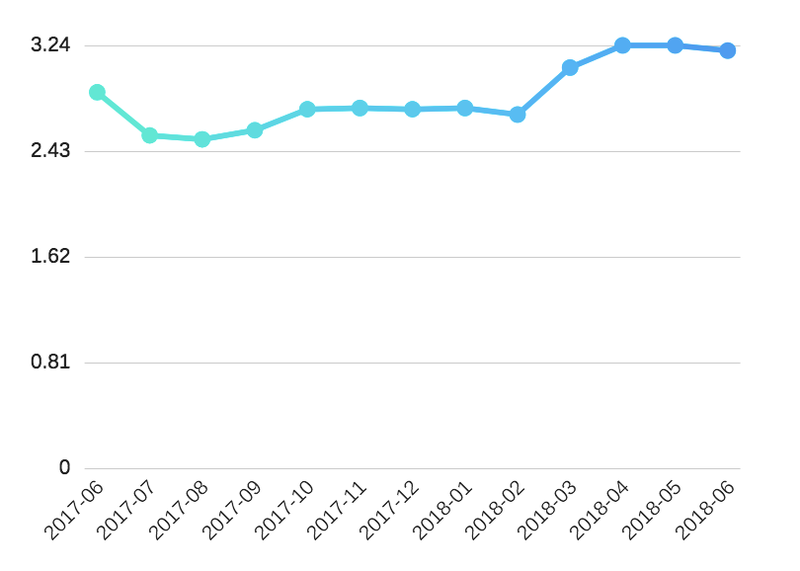 Bing is of course owned by Microsoft and those with a problem with Google’s behaviour might not be massive Microsoft fans either. They have however created a strong search engine that almost makes up for the hellscape that maintaining IE compatibility used to be (I’ll never forget Microsoft, sorry but some scars just run too deep!).

Joking aside, Bing also controls more of the market than it might first appear, as the next biggest player Yahoo! is also powered by Bing.

Personally I like Bing, they tend to be very proactive in developing new search technologies and I’m excited to see what they do next. I know AI is a big thing over at Microsoft, just like with Google, and that appears to be the next search arms race. Microsoft spectacularly lost out on mobile so you can bet they're going into AI with guns blazing.

A search engine with an emphasis on privacy, DuckDuckGo focus not just on results but on making sure your data remains private - something other search engines don’t seem to want to talk about too much.

If the recent spate of news articles about how Google, Facebook and other large tech companies use your data is making you think more carefully about your online activity then this may well be the search engine for you.

It also comes as no surprise that in the last 12 months a company that focuses so heavily on making sure your data remains yours, has become increasingly popular: 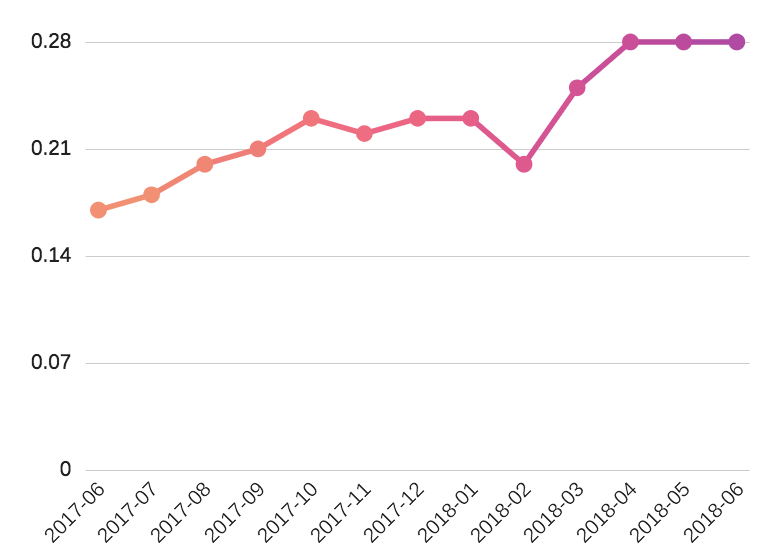 DuckDuckGo don’t provide results from their own index, although they do have their own crawler. Instead, information comes from a range of other search engines’ APIs, which they then mash together depending on the query:

“DuckDuckGo gets its results from over four hundred sources. These include hundreds of vertical sources delivering niche Instant Answers, DuckDuckBot (our crawler) and crowd-sourced sites (like Wikipedia, stored in our answer indexes). We also of course have more traditional links in the search results, which we source from Bing, Yahoo, and Yandex.”
https://duck.co/help/results/sources

This does mean that they are reliant on the quality of other search engines, but they are also developing new tech such as DuckDuckHack to sidestep this. Indexing the entire web is something that really only the two top players, Google and Bing, can do effectively.

The other thing DuckDuckGo offer are cleaner, less cluttered results. If you’re a fan of the old days where results were just text without YouTube videos peppered into just about every search imaginable, well then this might be just the engine for you: 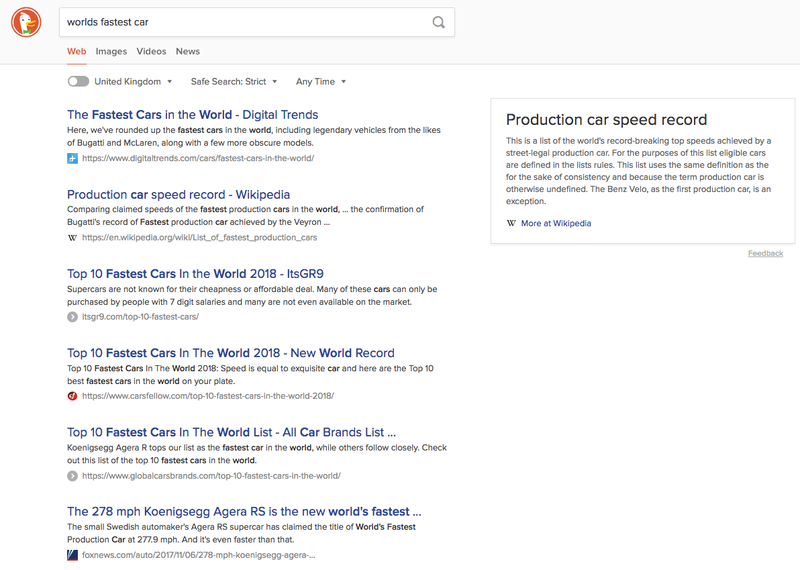 Yes MSN are still going. And if, like my Dad, you long for the days when opening a new tab confronted you with a mix of advertising, news stories and weather information - boy do I have the search engine for you... 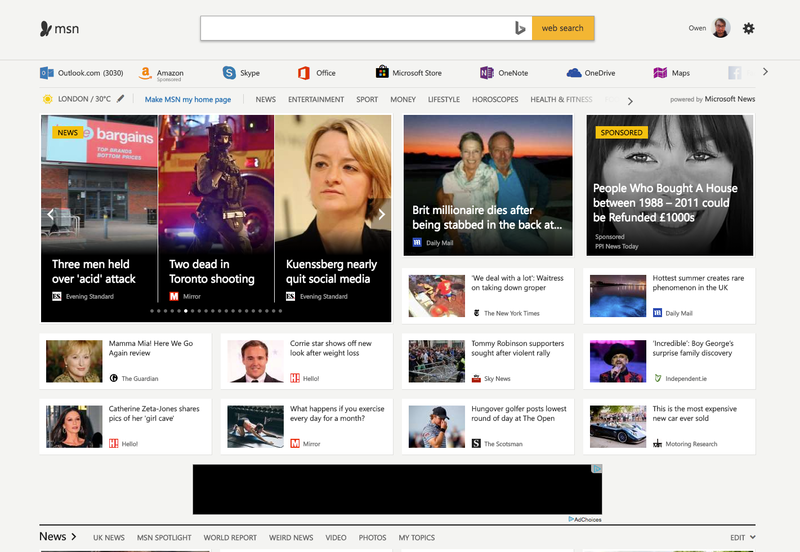 Full disclosure, they are clearly not my cup of tea. However plenty of people do like a more customisable, portal style of search engine. With MSN you can access everything in one place. For those who find navigating the web more difficult, having your email and other services accessible from the page you open the browser on is actually pretty handy.

The search results themselves are just Bing. That is, you hop through a redirect and land on the Bing results page. Clearly though that’s not the attraction for MSN.com users as it’s more seen as a news site.

Dogpile are a meta search engine, meaning they fetch search data from multiple engines (much like DuckDuckGo) and return a compilation of the results.

“Each search engine has its own method of searching and each will return different results. Dogpile looks at all of them, decides which are most relevant to your search, eliminates duplicates and reveals them to you. In the end, you get a list of results more complete than anywhere else on the Web.”

As one of the original search engines still hanging in there from the very early days, it’s good to see them still going. They are reported to be making a bit of a comeback but there are a couple of things to watch out for.

The first is that it is not served over https by default. So if you go directly to dogpile.com you’ll go to the non-secure version. You need to manually navigate to the https version. It’s a small annoyance but if privacy and security are your thing it’s something to watch out for.

The other is the results format. Whilst I really like the idea of compiling the best of results from around the web, what I actually get is this: 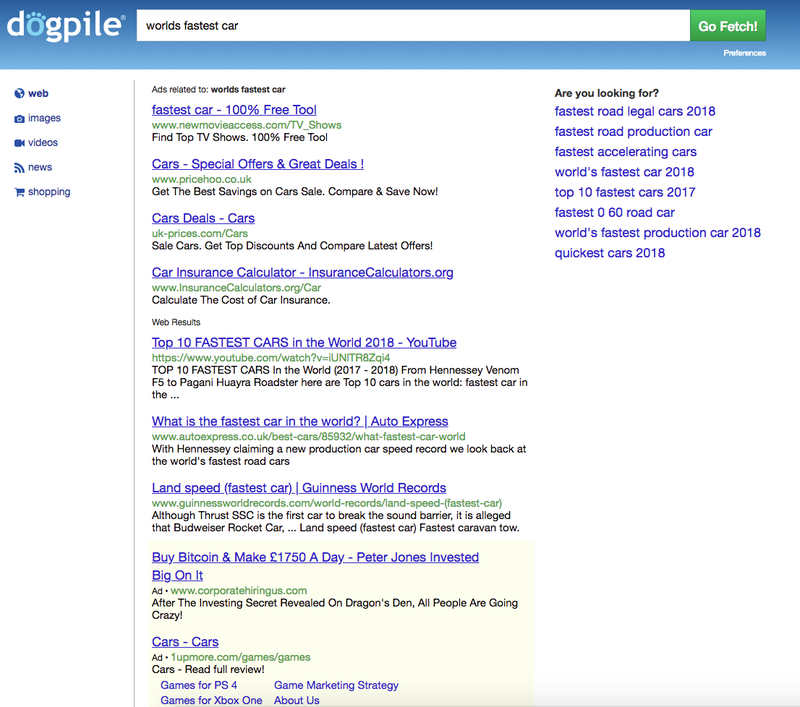 So above the fold we have 9 results, 6 of which are ads. We only get 3 organic results. This is especially annoying as they are poorly demarcated with some paid results in yellow and some in white looking exactly the same as the organic ads.

This is not helped when those paid ads for the search ‘world’s fastest car’ include only 1 that is really useful to the search and some that are just wildly irrelevant (Buy Bitcoin?). This is further compounded by a third of the organic results being a link to a YouTube video.

I like the idea of dogpile a lot and think it’s got great potential to make a comeback. But that won’t be until it provides some real value over Google and gives me a reason to return to it.

Another search engine from the early days of the internet. And to be honest, I feel like I owe Lycos one. Back in the naughties some time I remember being invited to a rather extravagant Terra Lycos party. There was an open bar full of fancy booze, a vodka luge made of ice, beautiful food and a massive venue rented out. Very shortly after, Telefónica, its Spanish owners, sold the company at a massive loss making back only 2% of their initial $12.5 billion investment.

Now, I’m not saying that the two events are in any way connected, but I still feel bad. So hopefully this can help repay that 15-year old debt for a free night full of vodka fuelled fun. Those guys knew how to throw a party.

First of all I have to say, I really do like the results. This dog based engine has nailed it: 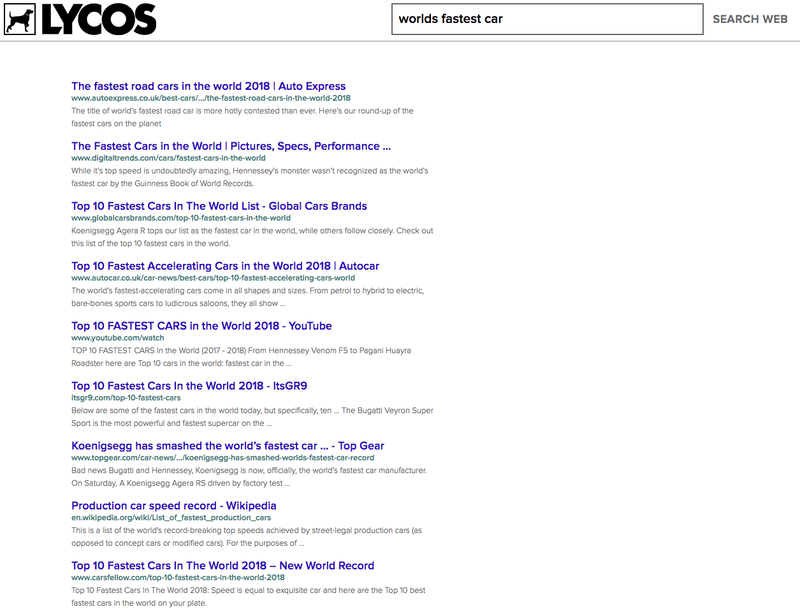 They are super clean, ad free and highly relevant. It’s not cluttered by different options or - my pet hate - interspersed with videos and images. It’s just the information I was looking for and nothing else.

As far as formatting, this is hands down my favourite set of results so far. I think other engines might edge them out on quality though. For instance I would have thought the wiki page on the fastest production car deserved to be above some of the various ‘top 10’ results from sites like itsgr9.com.

Trying to find out what or who powers the Lycos search results was a little tricky. I know in 2004 they switched to Yahoo! who themselves switched to Bing. However the results are not that similar. In fact crossing out the irrelevant results it shows Lycos coming out on top: 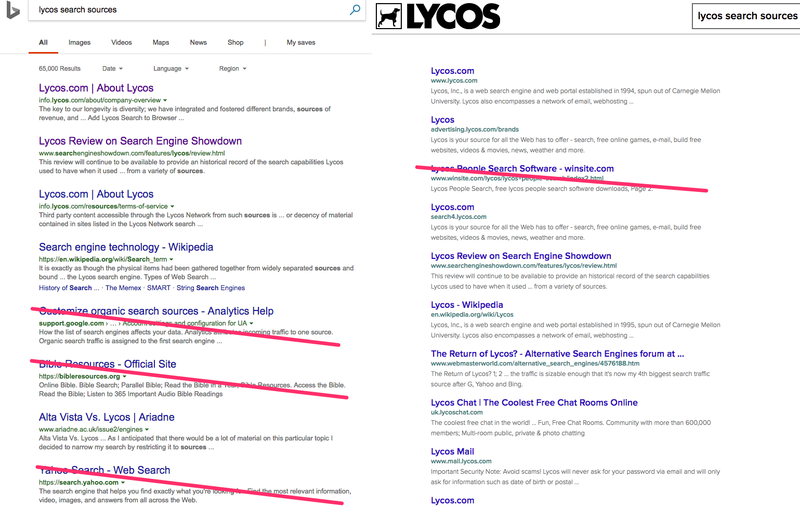 It could well be the case that, just like a meta engine, Lycos do some additional processing on top of the results from the Bing API to improve upon them.

So it’s not all Google.

This is really just a taste of the different search engines out there. I have stuck by the more popular English language sites, so the other big global players such as Baidu and Yandex are conspicuously missing.

The biggest surprise to me by far was Lycos. I knew Bing was solid and DuckDuckGo was good, but I wasn’t expecting Lycos to be the standout here. If you’re put off from Google by the amount they try to cram into a page and are looking for clean and simple results, I would recommend giving them a try.

Of course for anyone looking to try and leave a bit less of a digital footprint, Duck Duck Go is the clear winner. So it’s also about why you don’t want to use Google.

Also, Lycos, if you’re having another party any time soon. Throw me an invite ;)

Owen Powis Published this article 24 Jul, 2018
Owen Powis is the CEO at Wordtracker and has spent his career working in the digital marketing sector. That time has been spent working at some of the UK's largest agencies dealing with clients ranging from SMEs to large blue chip organisations. With hands on experience ‘at the coal face’, multi-channel marketing is of particular interest, with a long-running bias towards SEO.