Search is changing. What's coming and how to prepare.

Posted by Owen Powis on 27 Jun, 2018
View comments SEO
Search is not the same as it used to be. We've gone from one platform to many and there are now more ways than ever to interact with the internet. Where are we now and what’s next? 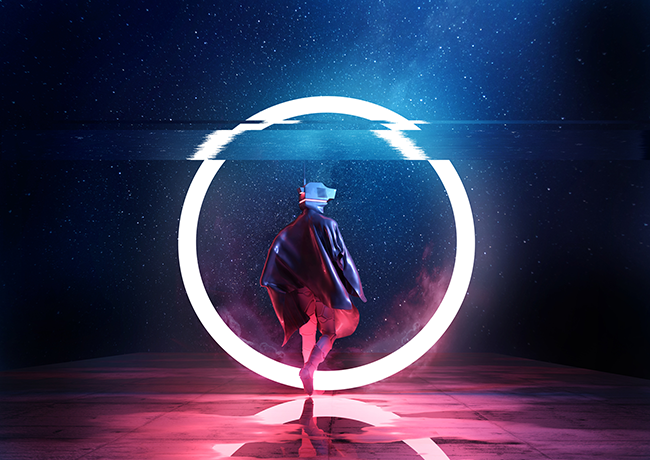 There is even some amazing archival footage still of Douglas C. Engelbart giving a demonstration of his new invention in 1968, 50 years ago.

So it’s no surprise that when Tim Berners-Lee first came up with the web back in '89 it was made on, and for, a desktop computer. Using a keyboard, mouse and a large screen. So much of the web has been built to be used and navigated in the same way, especially in the very visual way information is displayed.

Anyone who has done some web design for a government funded site will likely know all about accessibility guidelines. Trying to make the web accessible for people with different needs and who might access it in a variety of different ways, such as via screen readers, is really difficult. It seems like it should be simple but maintaining cross compatibility with different input and output methods is a tall order.

This is why sites which make accessibility a priority often end up with less exciting or more simple designs. That’s not to say accessibility is a bad thing, much the opposite. It’s just really difficult to do well. This is the same problem we see with mobile search and other new technologies as they increase in popularity.

At the start of 2009 mobile accounted for less than 1% of search traffic. It now accounts for the majority at 53%. That’s a fundamental shift in the way we search and indeed the way we access the web. 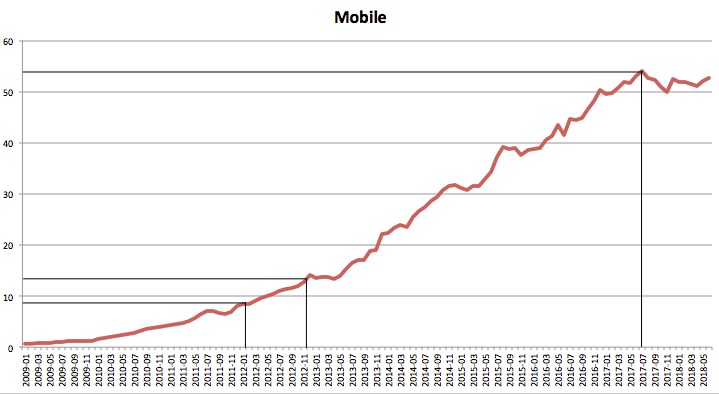 2012 is the year that the shift really started happening at a very rapid pace and by 2017 the majority of searches were on mobile. That’s how long it took for a new technology to take over, 5 years for mobile to topple the previously dominant desktop.

This is significant as mobile requires significant reformatting of the desktop web to make it usable. This wasn’t something that was worthwhile with WAP, either because the technology was not strong enough or perhaps because the costs were just too great. The iPhone changed all that in 2007 by bringing the actual web to your handset. As 2 years later in 2009 mobile still only accounted for 0.6% of searches, it's clear it took a few years for the web to catch up with the new technology.

Right now we may well be in that same ‘lag time’ between a new technology appearing and the changes that make it truly useful being put in place before several new formats really take off.

Voice search is something which has been around for a while, as has screen reader technology. However the step change is the more intelligent way that voice is now used for both searching and relaying back information. These are the ‘asssistants’ which find and retrieve information for you or take real world actions based on your instructions. Amazon Echo and Google Home are prime examples. 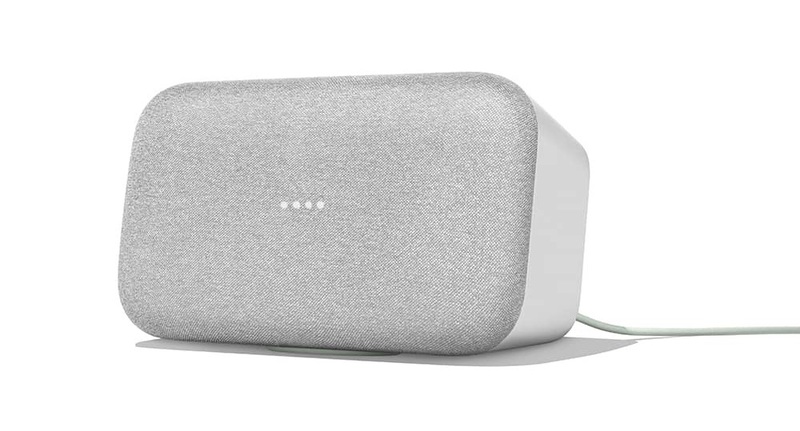 This is very different from, for example, voice search on mobile or even on PC.  I remember around 15 years ago using a Microsoft program to train my PC to respond to voice commands, including searching and using the web. Back then it was a novelty making you feel like you were in a sci fi movie (or just maybe  on the bridge of the Starship Enterprise). Now we use voice commands in much more practical ways on mobile for the occasional situation like driving. But it’s not doing a whole lot more than changing speech to text.

Voice search is fundamentally different from mobile search optimisation. It lends itself more towards long-tail rather than short tail keywords. But structured data also becomes far more important. Assistants such as Alexa use that structured data to relay better quality information.

However there is also a balance tob e struck, as there is currently limited benefit for publishers to being assistant friendly. Google and Amazon are going to have to get creative in order to monetise publishers' content, as voice is such a difficult channel for ads. This might be a model based on paying publishers a small fee whenever their content is used, or perhaps providing credits for more ad friendly platforms.

If you’re in any doubt as to the importance of voice search comScore predicts that by 2020 50% of all searches will be voice. 50%. Right now we're in that lag time between the web adapting itself to the new technology and the platform really taking off.

If you want to be better prepared we have a great guide to voice search optimisation which includes both mobile and assistant optimisation. As soon as the big players like Google and Amazon work how to properly incentivise publishers, competition will be fierce.

Way back in February 2000 JLo wore a green Versace dress to the 42nd Grammy Awards ceremony. That green dress was so popular that Google noticed people were having problems finding it through their traditional web search. To remedy this Google released Image Search in 2001.

It was another 10 years until Google released reverse image search and a completely new way to search Google was unveiled. Google continued to improve image search, most recently with the release of Google Lens. Originally a native app for their flagship handset, the Pixel, it can now be used on a variety of devices. Lens, like voice search, gives people a completely different way of searching. You could for example point your phone at that famous green dress in real life and have Google come back with a range of information about it.

This marks yet another way to input information into search. It might seem a bit gimicky right now but according to Google it’s going to be important:

Much like voice, we see vision as a fundamental shift in computing and a multi-year journey.
https://blog.google/products/google-lens/google-lens-real-time-answers-questions-about-world-around-you/

Just like with the introduction of other new technologies it’s going to be a long haul. However, in this case the incentivisation is much clearer for retailers - showing up in a result for a search here can directly result in sales.

Getting online with a big screen isn’t restricted to desktop any more. We also use everything from games consoles to smart TV’s to browse the web. These devices currently make up a very small percentage of market share, around 0.11%, but that’s still a massive amount of traffic going through them.

The market here isn’t growing in the same way that it is for other markets either. Over the last couple of years growth has been pretty much static (with the odd peak when a new console is launched). 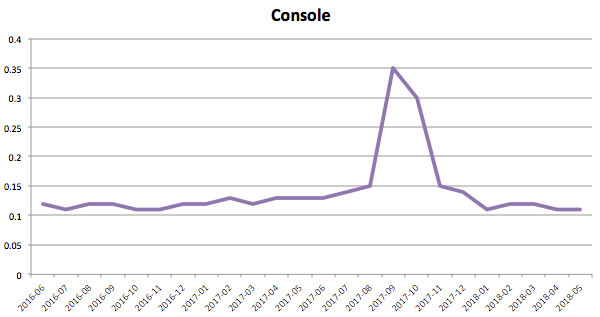 There really isn’t much information out there on how to best optimise for the massive variety of devices on which your site might be accessed. As it has to account for a massive variety of screen sizes and input methods, from a Nintendo DS stylus to a smart TV remote, the best bet is to make responsive websites which are as accessible as possible.

Web development and optimisation used to be a case of making sure you followed best practice and your biggest headache was getting sites to render in IE and Firefox. Those days are long gone. The current landscape consists not only of multiple platforms but also has to take into account the different ways those platforms interpret the information you provide.

We could be in for some really big changes, not just in search but across the entire web, in the next couple of years. Unlike when mobile happened (remember the 'mobilegeddon' panic) which was really just finessing the existing web to fit in a new format, the changes on the horizon require a complete refactor. Of course we will have to wait and see what the outcome is, however unless the big platforms (Google, Amazon, etc) incentivise publishers to create content in the correct formats there might not be the growth they are predicting.

Owen Powis Published this article 27 Jun, 2018
Owen Powis is the CEO at Wordtracker and has spent his career working in the digital marketing sector. That time has been spent working at some of the UK's largest agencies dealing with clients ranging from SMEs to large blue chip organisations. With hands on experience ‘at the coal face’, multi-channel marketing is of particular interest, with a long-running bias towards SEO.