Posted by Owen Powis on 25 Sep, 2018
View comments SEO
Google has now been around for 20 years and in that time it has changed the world by becoming part of all of ours in a way that few other companies have managed. However at the heart of it, what it does has remained remarkably similar.

As well as bringing us the end of both Seinfeld and the Spice girls, 1998 also gave us the birth of Google as well as the iMac, putting that other tech giant, Apple, back on the board.

Since 1998 a lot has changed, not least that Google is in fact now Alphabet. It’s no longer ‘just’ a search company but in reality part of a bigger remit. Although one that still gets 70% of its revenue from search advertising.

That’s an important thing to note, that 20 years later, an eon in terms of .com companies, Google is still, at its core, doing the same thing. You go to a webpage, plug in a query and get lists of results back. 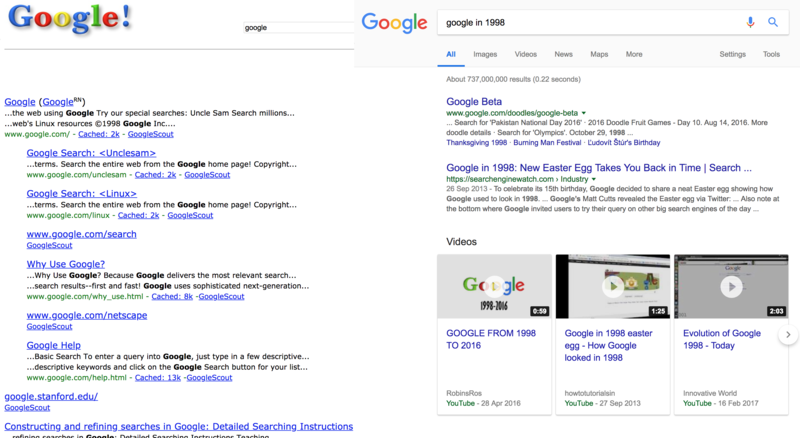 The way we search has remained by and large the same, although some things have changed, like the number of keywords used or the form of the search query, as the devices we use to search have also changed.

The way in which the results are displayed is also different, adapting to new mediums and rich content such as video. Some of this is driven by technology, like having higher bandwidth connections allowing for video content to be both uploaded and streamed more easily, but also through Google seeking parity across devices. The way Google looks on mobile and desktop is designed to be similar.

Google is also seeking to change not just the way the results look but also the way in which they connect us to those results. Its recent announcement that intent is now to be included in exact match keywords within Ads is telling. It’s unlikely they would roll out a change to their main money making platform that literally supports the rest of their endeavors without a high degree of confidence.

When you search for something Google is now actively trying to understand not just what you searched for but why you searched for it. They have a broad understanding of your behaviour across devices, your location, what you usually search for at that time of day and a myriad of other data points. All of this information is compiled to try and understand what it is you really want rather than merely the words you personally use to express that. New products such as Google Discover are examples of this technology at work.

This does not however mean that keywords become less effective, but rather that Google is looking to change the way in which they interpret them. Keywords are, after all, how they generate their revenue from advertisers. As they change how a keyword triggers a result (looking at intent rather than language) we also need to delve into why people search with the keywords they use.

At Wordtracker, we’re always looking at the direction Google is moving in so we can provide the best possible toolset that best matches Google’s behaviour. We’re looking ahead to see what Google might do over the next 20 years. It all started with keywords and they remain at the heart of search.

We’re looking at how to include more intent driven metrics within the tool but also how to make up the shortfall that Google is creating for SEO and PPC marketers. As the Keyword Planner becomes even more restrictive and further removed from reality, we’ll be adding in more of the data they leave out.

Just like Google the fundamentals of what we do have not shifted over the last 20 years. You provide a keyword and we show you the niche around it. However the way we do that has changed and we’re looking at implementing more of the latest technology, like Natural Language Processing.

Google has published a surprisingly small amount of information in celebration of their 20th anniversary, with this post on their blog. This may well mean they have an even bigger announcement around the corner. Whatever it is we’re excited to see what they have in store and we will, as always, be making sure we keep giving people access to the data they need.

Owen Powis Published this article 25 Sep, 2018
Owen Powis is the CEO at Wordtracker and has spent his career working in the digital marketing sector. That time has been spent working at some of the UK's largest agencies dealing with clients ranging from SMEs to large blue chip organisations. With hands on experience ‘at the coal face’, multi-channel marketing is of particular interest, with a long-running bias towards SEO.