Red VS Blue: The UK Election special according to Google Trends!

Posted by Owen Powis on 2 Jun, 2017
View comments Search News
With one week to go before the UK general election, the polls are all over the place and once again no-one is quite sure what’s going to happen. So let’s roll up our sleeves and see what the data shows.

Google Trends makes the most sense to gather data from as it's a good sized sample and up to date. However the data is not without its problems. Still, that shouldn't stop us from taking a punt at guessing the result...

The two parties with a chance of an outright victory are the Conservatives and Labour, so it makes sense to concentrate on these. The first port of call is to pull out the the searches for both of these:

The average for the past month in the UK is showing 19 Labour searches for every 6 Conservative. But does this reflect in any way how people feel about the different parties? Does more searches equate to more popular? Well what the polls do seem to tell us is that in the last few days there has been something of an upswing for Labour and looking at the data, that seems to be reflected:

Not quite as expected, Labour still have an increased amount of searches even though they suffered a loss at the election, losing 26 seats and gaining only 30% of the vote to the Conservatives 37%. So what’s going on?

There's a well known age split between Conservatives and Labour, with the Conservatives usually gaining the majority of the older vote. Let’s take a look at some data from the last general election to see if this holds true: 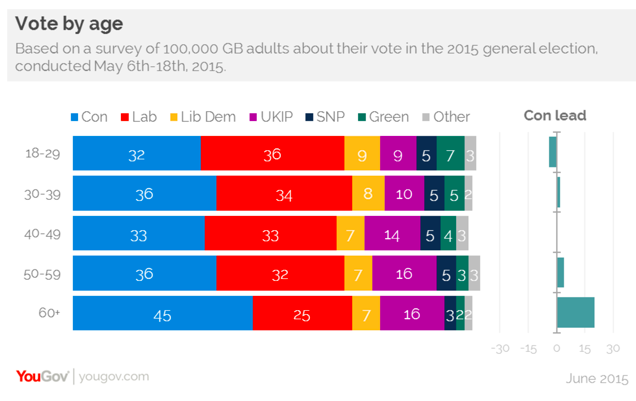 So clearly in the over 60 bracket there is a big skew towards the Conservatives, and it looks like from 40+ as age increases the likelihood of voting Conservative also goes up. We also know that as age increases, regular use of the internet also falls away: 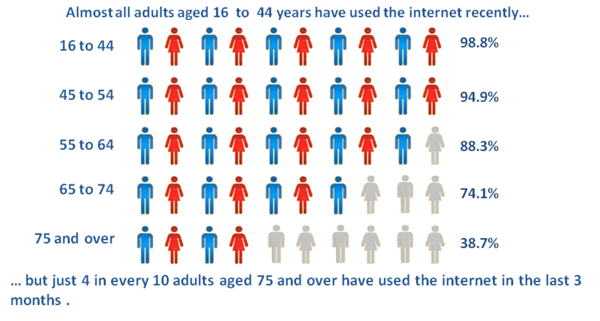 So it stands to reason that Labour will have some advantage when comparing numbers of searches and this can’t be equated directly to a result. Let’s go back one more election to 2010 to give ourselves a final point to work from:

Once again we see a slight Labour lead, with the Conservatives trailing. But we’re not seeing a big majority either way. Although this election actually resulted in a hung parliament, looking at the popular vote the result is very similar to 2015, with Labour getting 29% and the Conservatives 36%. So the search trends and outcome (in terms of the popular vote) are very similar between the two preceding elections.

I wanted to see how strongly the two trends correlate against each other, so using the export to CSV function in Google Trends I pulled the data out for both elections and put them together on a graph, I also corrected for the different day each was run so election day is at the same point: 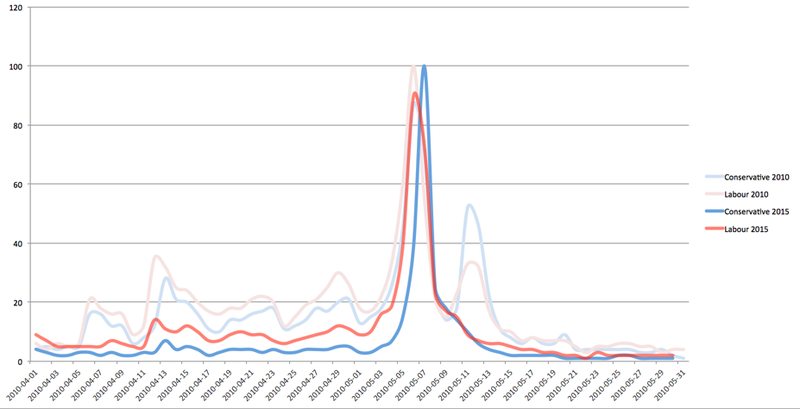 Both trends look very similar, which ties in with the results being so similar. But how many more searches does one party get over the other and does an increasing lead in the number of searches mean an increase in votes? This is a bit more tricky as Google Trends data is all about trends, you don't get exact numbers to work to.

What Google trends do tell us though is the average for a given period, which we can use as a ratio of searches: 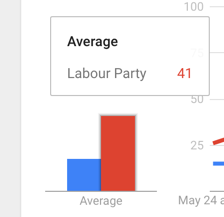 At this point in the election contest it's an average of 41 for Labour and 18 for Conservative, or near enough a 2:1 ratio. This is a much bigger gap than in 2015 where with a week to go the ratio was 3:2, and in 2010 (when it was a hung parliament) it was even closer at 7:5. So my guess is, if they continue on trend they will outperform their previous results from 2010 and 2015 and it will place Labour and Conservatives as holding a similar percentage of the vote. How that gets allocated may well be the deciding factor as the UK's first past the post system means that it's not about just how many people voted, but where those people did so.

Based on the trends data alone, with the increase in searches for Labour over Conservative and how the previous votes have turned out, my prediction is a hung parliament. However, as we all know, when it comes to elections in the past 12 months... really anything could happen!

Owen Powis Published this article 2 Jun, 2017
Owen Powis is the CEO at Wordtracker and has spent his career working in the digital marketing sector. That time has been spent working at some of the UK's largest agencies dealing with clients ranging from SMEs to large blue chip organisations. With hands on experience ‘at the coal face’, multi-channel marketing is of particular interest, with a long-running bias towards SEO.