Posted by Rebecca Appleton on 2 Nov, 2015
View comments Search News
Google is continuing apace with its war on poor user experience and webmaster guideline violations by setting its sights on new infringements; mobile only redirects. 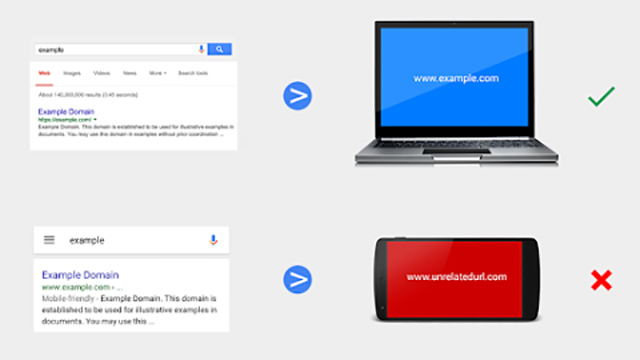 Vincent Courson and Badr Salmi El Idrissi from the search engine’s Search Quality team published a lengthy post on October 29th explaining how and why websites using mobile only redirects are in breach of Google best practice guidelines and what punishments they should expect to be meted out.

The search engine itself admits that sometimes, for the sake of the user experience and varying screen sizes, it may be necessary to adjust or vary the type of content that is displayed on a site, in accordance with the device being used to view it. The smaller screen of a cell phone for example may mean that a full menu bar is not displayed across the top of a site or that some larger images or types of content are omitted. These changes are all acceptable and won’t result in a penalty.

However, Google believes an increasing number of publishers are redirecting users searching via a mobile device to entirely different content hosted on an unrelated URL. A user will see a search result as usual. However, if they click through from a cell or tablet, they will be sent to a different website. This only affects mobile users and not desktop search.

In addition to webmasters deliberately sending users to non-related sites, Google has also observed an increase in schemes which siphon off traffic to other sites without the site owner’s knowledge:

1. Advertising: some display ads contain scripts which are sending site users through to a totally different site than the one the user expects. This is done without the website owner’s knowledge.

2.  Hacking: Hacking and spam loom large on Google’s agenda. It says that some hackers direct mobile users to spammy sites.

Courson and Salmi El Idrissi advise website owners to test the mobile version of their site regularly and pay attention to user complaints. Google Analytics can also be helpful, and will send an alert for suspicious activity such as a notable and sudden drop in traffic from mobile users.

The Search Quality team also have some words of wisdom for those who find their mobile site is sneakily redirecting users elsewhere. It says to check first if the site has been hacked, using the ever-growing pile of free tools Google has available for this purpose. The Security Issues tool in the search console is a first port of call which will flag up any causes for concern Google has noted, but a range of other resources are also accessible for free.

Scripts should be checked, particularly those provided by third parties such as advertisers.

A final word of warning. Google says those sites that are redirecting users to content which is different to that shown to its crawlers will be penalized. Manual action penalties are being applied now for mobile sites using sneaky redirects.

What do you think to Google stepping up its fight against hacking, poor quality content and a bad user experience? Should manual actions be applied for mobile redirects that point to other content?

Rebecca Appleton Published this article 2 Nov, 2015
Rebecca is Wordtracker's lead writer and also the managing director of digital PR and marketing agency, Dakota Digital . She is a former Press Gazette Online Journalist of the Year award winner and holds a 1st Class Masters degree in Online Journalism. With more than 8 years experience at the forefront of digital marketing she works with small, medium and large organizations, across all main verticals, in the UK, US and Australia. She is also a published author and digital marketing columnist.

Posted by Andrej Kovačević on 1 June 2021