A Retrospective Of All Of Google's Super Bowl Ads Ever

Posted by Owen Powis on 30 Jan, 2020
View comments Search News
With the Super Bowl about to kick off this Sunday, Google have already released their half time ad for 2020. And it's a bit dark.

In this retrospective we take a look at how Google have gone from the joy of 'Parisian Love' to the dystopian overtones of 'Loretta'.

In Google’s first large scale foray into TV advertising, their 2010 Super Bowl ad was somewhat of a surprise.

The ad itself is focussed on a love story told through the SERPs. With each search we watch the users journey progress as their relationship flourishes. It’s a touching ad that’s designed to pluck at the heartstrings. It’s also a bit of a blast from the past seeing how much the platform has changed in the intervening time.

Interestingly the video wasn’t designed to be used as a Super Bowl ad at all. In fact it wasn’t even meant to be a free standing advert…

“We didn't set out to do a Super Bowl ad, or even a TV ad for search. Our goal was simply to create a series of short online videos about our products and our users, and how they interact. But we liked this video so much, and it's had such a positive reaction on YouTube, that we decided to share it with a wider audience.”

So it had been floating around online for several months before Google decided to buy it it’s very own spot at the Super Bowl.

The ad cleverly takes us through a range of Google’s services at the time, showing off it’s flexibility and diversity. You get the sense Google is telling us they are more than just a search engine, they are part of our lives.

Overall the ad is uplifting and forward looking, making us think of finding love and settling down. It’s just nice.

It was 7 years before Google returned to the Super Bowl and when they did it was to promote one of the biggest things from Google that decade, Google Home.

It was perhaps in response to Amazon’s own 2016 Super Bowl ad for Alexa, Baldwin Bowl. Which was a more light hearted ad which promoted Alexa by focussing on features and was packed full of celebrities.

Google was far behind Amazon’s Alexa in sales in 2017 so looking at the numbers it makes sense that Google wanted to make sure they weren’t letting Amazon outpace them with advertising. 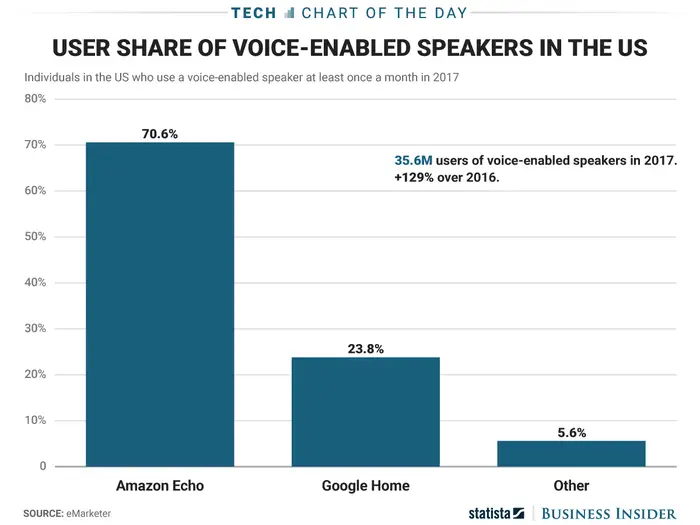 With their ad Google focus on showing scenes of family coming home and celebrating, which Google Home of course seamlessly integrates with. Importantly it’s not just about being part of the home but also the family. In other words it is the family that makes the home and Google wants to be part of that.

The message “Home by you, help by Google” shown at the end of the ad helps to reinforce the ads messaging. It’s a vastly different approach to Amazons celebrity laden offering.

There was also the traditional consequence of smart speaker adverts on TV of, of course, setting off everyone Google Home devices during the ad.

That @Google home trailer made my google home have a meltdown.

Last year Google actually ran 2 spots at the Super Bowl. In their first spot of 2019 Google ran an ad promoting Google Translate, 100 Billion Words, the number of words which are translated every day.

In an ad that echos their very first Super Bowl ad back in 2010 we’re invited to see how people use Google’s services, this time focussed on Translate.

The messaging is hopeful, promoting diversity and unification over the human experience. Things that we can all share and relate to. It’s a powerful ad that once again places Google into vital moments of our lives.

The second ad from Google last year was this ad to promote a new search functionality, using codes relating to a person's specialism in the military to find suitable jobs based on their experience.

The codes used are known as MOS (Military Occupational Speciality) and these designations are now baked into Google’s search functionality.

It’s another touching ad which like previous ads aims to strike an emotional tone. Reinforcing the difficulty of being a service person and the sacrifice needed. However the ad did not go without some criticism about Googles own opaque hiring figures of veterans.

Each year Google releases a diversity report that lists employee numbers by gender, race and ethnic background. However, the company does not release numbers for how many veterans are in its workforce. The spokesperson said in a statement that the company is "looking into ways we could collect and share" statistics on veteran hiring.

Then there is the ad for this years Super Bowl which has already created some controversy. With ZDNet saying “Google's lovely Super Bowl ad shows how sad the future will be” and TheVerge labelling it as “sad and creepy”.

The contrast between this and previous ads is stark. Google has gone from cheerily helping us find love in 2010 to being an lonely old man’s AI assistant helping him reminisce over his dead wife. It’s sort of missing the upbeat vibe that we’re used to from Google’s ads. So what's going on over at the Googleplex?

It may well be that Google has an eye on the elder care market. We know that Robots are being increasingly looked to help with elder care and bridge the gap created by aging populations:

The idea behind elder care robotics has been around for years. Its relevancy, however, has become increasingly more apparent as the gap between the number of available caregivers and the world’s aging population continues to widen.

Even if that's the aim it doesn’t make the approach any less creepy. Especially when in order to use these services Google is relying on us handing over control of our personal data and media.

The messaging is at it’s core the same as they have used in previous ads, it’s about Google being part of the journey of your life and being there at key moments. Although the ad isn’t about traditional search functionality this time but about it's AI driven service, which says a lot about where Google’s focus is.

Comparing this directly with Parisian Love the change is clear and I can't help but think it may well be a direct reflection of the changes we have seen at Google in the past 10 years. Going from a young and hopeful company to a more mature and battle hardened business. As they have dropped their 'don't be evil' motto, become embroiled in record breaking fines and come under increasing critiscm for their data hungry approach.

The ad is inviting us to envision Google as part of our future. Having become a mainstay of all of our lives they will still be there to the end of our journey, with all the details of our lives on hand. Which is in itself a somewhat unnerving thought. Hopefully Google will return to a bit more of an upbeat message in future with less tones of robot overlord.

Did you like the new ad? Let us know in the comments what you think and if you're looking forward to ending your days with Google for company...

Owen Powis Published this article 30 Jan, 2020
Owen Powis is the CEO at Wordtracker and has spent his career working in the digital marketing sector. That time has been spent working at some of the UK's largest agencies dealing with clients ranging from SMEs to large blue chip organisations. With hands on experience ‘at the coal face’, multi-channel marketing is of particular interest, with a long-running bias towards SEO.