Google fined $2.75 billion for giving an illegal advantage to another Google product

Posted by Owen Powis on 28 Jun, 2017
View comments Search News
Google found promoting its own comparison shopping service in its search results whilst demoting those of competitors.

Have you seen the press release from the European Commission on the massive 2.42 billion euro (2.75 billion dollar) fine they have issued to Google and parent company Alphabet?

It makes for interesting reading. This is how they sum up the findings in the release:

"Google has abused its market dominance as a search engine by giving an illegal advantage to another Google product, its comparison shopping service."

It goes on to state:

“Google abused its market dominance as a search engine by promoting its own comparison shopping service in its search results, and demoting those of competitors.”

Notice the language there. Google demoted the competitors to one of its own services within the search results. Not just favored its own but pushed competitors down. If you remember 'Froogle' then you'll also remember it wasn't exactly great.

They go on to give more detail on exactly how Google promoted its own service and demoted others:

The bit that really gets my attention is this:

“Google has included a number of criteria in these algorithms, as a result of which rival comparison shopping services are demoted. Evidence shows that even the most highly ranked rival service appears on average only on page four of Google's search results”

If there was one thing I always thought was sacrosanct it was the fairness of Google’s ranking algorithm. It is what it is and no matter who you are or what your site is, you’re treated the same. Such as the times Google has penalized itself, like when Google Japan was busted for paid links or like when its own Chrome browser was too. Here we have the European Commission finding that Google was demoting a type of site that was in direct competition to one of its own struggling services so far down the results it had “given its own comparison shopping service a significant advantage compared to rivals.”.

How was it implemented?

According to the release, this was rolled out accordingly:

Google has historically favoured big named updates to make large scale changes. So I had a look at what updates were there in 2008 to see if anything matched (finding country specific update data is hard so if anyone has any more information on this please let me know in the comments). In April 2008 there was ‘Dewey’ which caused big shuffles in the results with lots of SEO’s reporting that their own sites had dropped from the top ten for core phrases down into the 100’s. This was in April though not January and not specific to the UK and Germany, so it seems more of a general change.

I'm not sure from the findings, and the way the commission has phrased the information, if this is specific targeting of price comparison sites or if Google demoted lots of sites and comparison sites happened to all be caught up in it. We know that Google has since 2008 had many updates which were focused on removing sites with generated or lower quality content, as well as those with poorer quality link profiles. My personal hunch is that comparison sites happen to be of a type of site that fits the profile of those which got hit especially hard by the way Google has shaped the search results. Of course the problem with that is, as the Commission stated:

So they have removed the option from the search results for the consumer to pick another comparison service without wading through pages of the results.

I tried a bunch of product and comparison terms. I generally found that using ‘comparison’ specific language I got comparison sites at the top of the SERPs. Using non comparison or product only terms I didn’t: 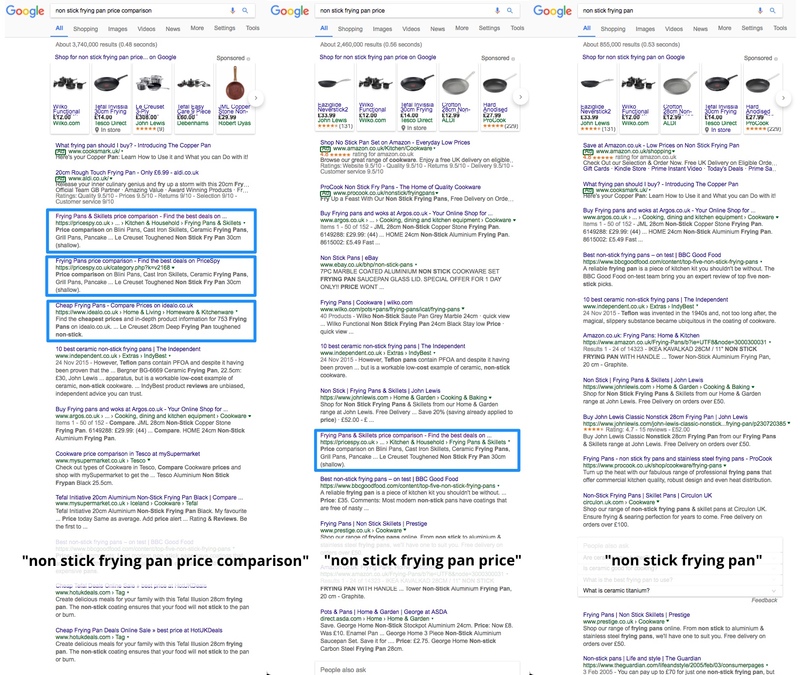 I've highlighted the price comparison sites, defined as those where comparing the price of a product from across a variety of retailers is the core function of the site. There were a couple I didn't highlight that might be comparison sites like mysupermarket.co.uk and hotukdeals.com as it’s not the core focus of those sites.

What this could mean moving forwards...

The commission has given Google 90 days to comply. In their words this means:

So Google, as I see it, has two choices if they want to keep the service. They can either stop placing their shopping results at the top and just treat the pages organically, or they will have to promote all the rival shopping sites to the top and give them the same visibility as their own shopping service.

The third option is, of course, to just scrap their own shopping service altogether in the EU. That sounds drastic but I’m not sure how they would actually implement the other two solutions. Injecting the Google shopping ads next to each price comparison sites results might work. But if they are so buried in the results no one sees it, what's the point. Promoting all the price comparison results to the top and placing them in equal prominence on the page is going to look pretty terrible and then bury any other type of site unfairly on that result.

Of course even if they do comply with the Commision's ruling that won’t be the end of this for Google either. As stated in the press release:

So even after this they are still going to have to fend off cases from individual businesses.

This may well mean Google is more careful with algorithmic changes that impact a certain market where they have a directly competing service. A slightly more delicate touch and more communication around changing the SERPs would be appreciated.

Although I don’t think we’ll be seeing drastic changes to the way Google makes changes as a result of this I’m hoping it at least encourages them to tread a bit more carefully. Just maybe they could treat slightly better the webmasters who provide the services and content which people go through Google to get to.

Owen Powis Published this article 28 Jun, 2017
Owen Powis is the CEO at Wordtracker and has spent his career working in the digital marketing sector. That time has been spent working at some of the UK's largest agencies dealing with clients ranging from SMEs to large blue chip organisations. With hands on experience ‘at the coal face’, multi-channel marketing is of particular interest, with a long-running bias towards SEO.