Posted by Chris Woods on 30 Sep, 2015
View comments Marketing
The Millennials have changed the consumer journey forever. If any of your customers are aged 18-35, their online and mobile behavior should be dictating your online marketing strategy. Learn how and why to adapt your digital activity accordingly in part one of this two part series. 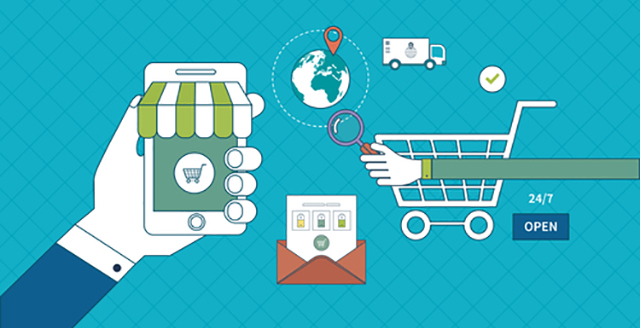 The Millennials, Generation Y, the Social Media Generation. Whatever your preferred terminology, those born from 1980 onwards represent the most active online audience. As a result, their behaviors and value system should be dictating most brand and business online marketing strategy. Millennials represent the present and the future direction of consumers and digital marketing.

In the UK and USA, 18-35 year olds exist in a period in which they barely remember a time without modern day internet access. Smartphones have been present and widely available for most of their adulthood, as have fast mobile internet, video streaming and prevalent social media platforms. All of these technologies are taken for granted by this audience.

Millennials are the most naturally trusting of online marketing from an ecommerce perspective – they are comfortable working, buying and selling online. 18-25 year olds consistently represent the audience bracket with the highest % of regular online shoppers. The 26-35 year old age bracket is also increasing steadily year on year so worth future consideration.

In their lifetime and certainly in the Millennials' adulthood, technology and online data infrastructures have enabled around the clock and immediate access to data when they need it, where they need it. Being constantly connected to information and to their peers via social media is the norm. The price and accessibility of powerful smartphone devices is such that over 90% of 18-35 year olds in the UK own a 3G capable smartphone (vs a 72% UK average) as of April 2015. In the USA, Millennials make up one of the largest population segments, with 85% of Millennials aged 18-24 owning a smartphone and 86% of those aged 25-34, according to Nielsen figures.

In the UK almost 20% of Adults (18+) live in a household with no landline but at least one mobile phone. In the USA, Pew research calculated that as of April 2015, “…7% of Americans own a smartphone but have neither traditional broadband service at home, nor easily available alternatives for going online other than their cell phone.” Aside from those irritating national PPI claim calls, gone are the days of marketing to households, mobile phones now offer a direct communication line to individuals.

As if I’m not drilling it home enough, here’s a few more, somewhat shocking statistics for you:

I speak to many brands and businesses of all shapes and sizes, national, international and local. And it surprises me time and time again when looking at their digital approach and strategy, that mobile and its place in digital thinking is still mostly an afterthought. TV and mainstream desktop formats still rule the day, but things have changed. Mobile isn’t the ‘3rd screen’ any more. Marketers, business owners and brands looking to the future need to start recognizing that mobile is numero uno! This isn’t a trend that’s going to pass, we’re only accelerating in this direction. Mobile is king and it’s going to rule for a long while. 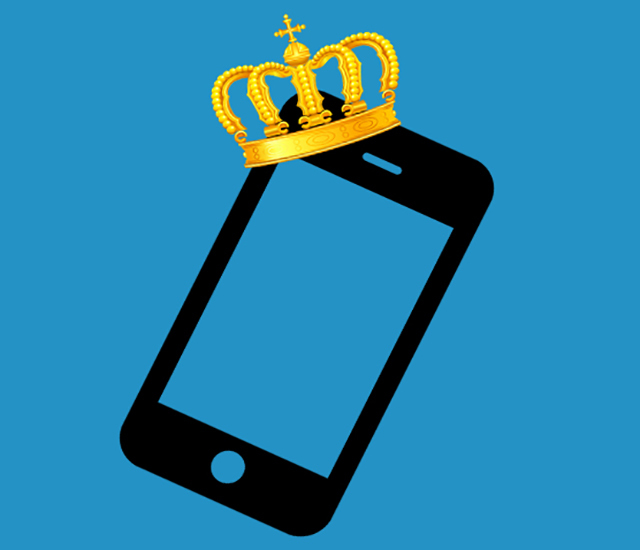 Mobile web browsing now accounts for almost half of all UK web traffic. Collectively mobile and tablet devices account for around 62% of all UK web traffic, clearly putting traditional desktop browsing in the rear view. In the USA, mobile digital media time in the US is significantly higher than desktop internet usage, at 51% compared with desktop’s 42%. As I have mentioned, this trend is only accelerating. 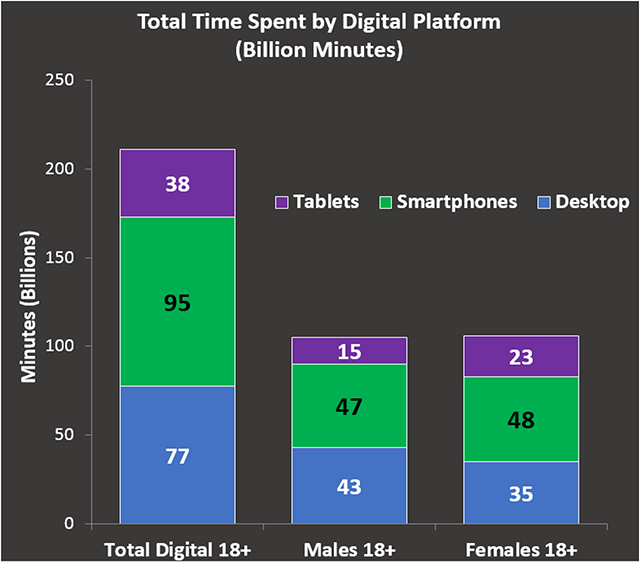 I think the most common misconception I hear is that marketers still look at mobile as a method of marketing for users who are on the go, hence “mobile”. While that is a unique stance for mobile devices, most don’t realize that actually almost 70% of all UK mobile internet usage is conducted from the device owner's own home! We use our online mobile features more at home than when we’re on the go. Stressing again that mobile is the number one screen in our lives.

Let’s look at this from another angle and look at mobile in conjunction with TV viewing. The majority of UK online mobile usage happens in our homes, what’s more though, 36% of UK smartphone owners use their device’s online features while watching television. This figure leaps to 43% in the USA. Known in marketing slang as ‘second screening’, even the television brands recognize the scale of this dual device habit and have attempted to cash in with popular shows creating apps associated with prime time viewing. The X Factor USA app allows fans to convey their feelings about the acts on screen at the time. This works as a judge’s chair experience, but the scale of second screening is often under estimated. 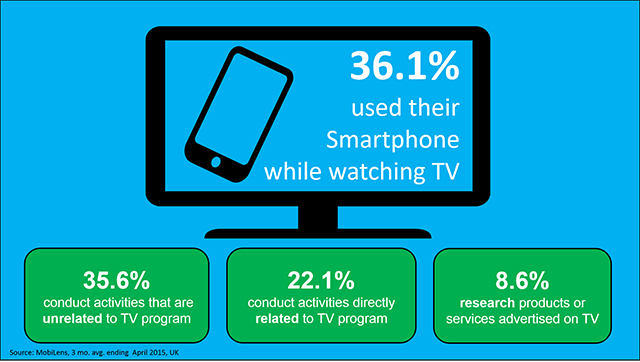 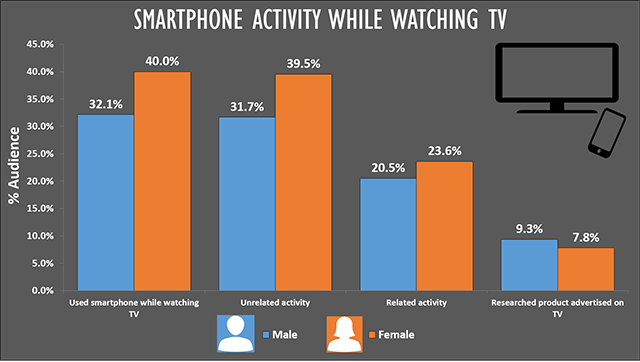 Now for those brands who are actively buying TV advertising, I don’t need to highlight the costs associated with this. But you pay this because you want scale and you’re buying what you consider to be a highly engaging platform. But how many advertisers are considering this mobile impact? 10% of second screeners reacting to TV advertising could be a huge number. Do you have real time social media and search strategies and budgeting to capitalize on this during the time your advertising is broadcast? Eliciting a mobile response from your audience should be part and parcel of every TV advertising strategy.

Being mobile ready with your advertising isn’t overly complex. The most typical mistake I see is that mobile simply isn’t factored into the planning process early enough. Formatting ads etc. for mobile often comes as an afterthought when it comes to the delivery phase. Simply ensuring you consider your new campaign or activity and how it will translate onto mobile, and how mobile specific media buying can actually form part of the initial idea, is where progress will be made.

To round off this helicopter view of mobile and its importance when marketing to the modern day consumer, is something I’m asked often: When preparing mobile strategies, is there an operating system you should focus on eg. IOS (Apple) over Android?

Put simply my advice would be to consider both IOS and Android as joint primary focus. Android devices now represent a greater market share of active UK smartphones than Apple’s iOS thanks primarily to Samsung and HTC creating a wide range of price varying devices for consumers who find iPhone too expensive. However, on the whole iPhone and IOS users download more apps than Android users and are more likely to pay for apps or to make in app purchases. The IOS audience is also more likely to transact via their mobiles on the whole.

My advice would be that unless you have identified a very specific audience which you are confident has a greater synergy with one of these two operating systems, treat both equally when planning mobile apps and formats. 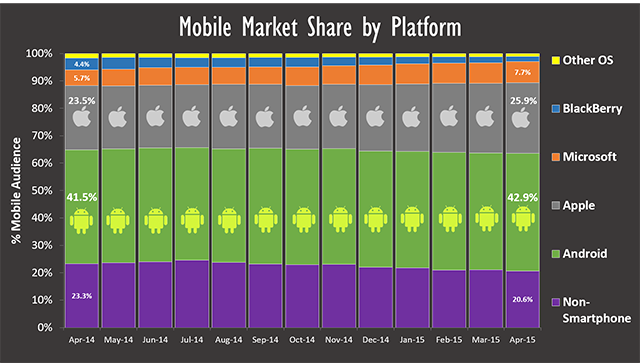 Don't miss part 2 next week, which tackles the subjects of social and content creation for brands marketing to Millennials.

Chris Woods Published this article 30 Sep, 2015
Chris Woods is a Digital Marketing veteran & strategist. A product of WPP and Omnicom Group agency experience turned digital consultant & online business founder, he is now the Head of Digital and Strategy at Dakota Digital. Connect with him on Twitter, LinkedIn or Email

A small business guide to starting a podcast [infographic]