BLACK FRIDAY IS COMING! But don't worry, we've got you covered with this guide to the ultimate consumer holiday for online retailers.

Posted by Owen Powis on 15 Nov, 2018
View comments Marketing
With over $3 billion about to be spent both online and in-store, you probably should be getting ready for Black Friday. So here's our guide to what it is and how to make the most of it.

Black Friday is coming, so how did it start, are you ready for it and what are some of best bits so far?

November 1975 is the first proper record of the term 'Black Friday’ being used to describe the day after Thanksgiving as the "the busiest shopping and traffic day of the year" in Philadelphia, which is where the phrase seems to have originated from. There are many competing theories but the most likely appears that it was simply originally referred to as Black Friday in Philadelphia by police describing the traffic deadlock in the city caused by all the extra people out shopping.

The increase in popularity of ‘Black Friday’ over time

The idea has spread not just throughout the US but across the globe with retailers pushing the idea into other countries. This is often reinforced by media reports on the potential hysteria, stock shortages and bargains. This in itself helps to fuel the hype, which in turn creates more drastic media reports.

It’s this hype which drives a fifth of shoppers in the US to camp out the night before in the hope of grabbing a bargain.

The fun doesn’t stop with Black Friday, for online retailers Cyber Monday has traditionally been the Monday following Thanksgiving. In 2003 it began to emerge as a strong day for online sales, with people not able to make it to the sales purchasing online instead.

Back in 2012 there was a Gallup Poll which showed that only 18% of adults actually planned to participate in Black Friday. Of that 18% the demographic was much more skewed towards the young, who have traditionally been the largest demographic for online shopping as well. This puts in context the move from retail to online, or in other words for spending to shift from Black Friday to Cyber Monday.

Cyber Monday has continue to grow not only in revenue, but also in duration, it has now spread into Cyber Week with sales running from Black Friday through the following week. 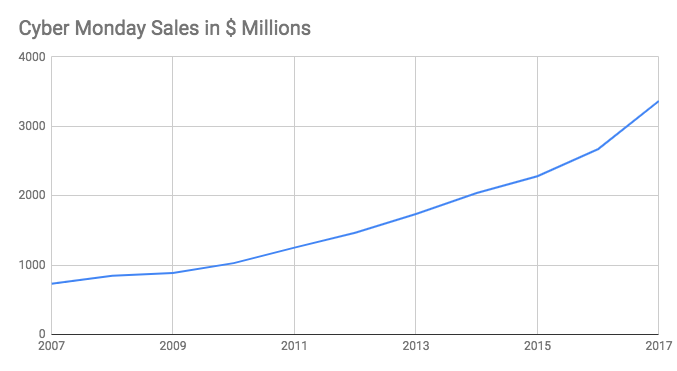 So the potential is huge. With over $3 billion up for grabs, what are the best strategies for making the most out of Black Friday and Cyber Week for your online business?

Getting the most out of Black Friday

Black Friday sees several trends each year, which having a solid knowledge of will help you optimise your campaigns for maximum effect. Usefully Adobe publishes an annual report on the trends seen each year.

Here are some of the key insights;

Expected shopping surge in the late hours of Cyber Monday: Three hours in the evening of Cyber Monday (8-11 p.m. in each local market) are expected to bring in more online revenue than the average 24-hour day. Conversion rates will reach their peak during the last hour of Cyber Monday (11 p.m. – midnight) at four times the annual average.

Standing out from the crowd

So whilst every major retailer is gearing up if you want to stand out from the crowd you need a way of reaching your audience which is a little different. Offering a really deep discount is always one way of doing it, but to cut through the noise you need to have a compelling campaign that also resonates with your audience. 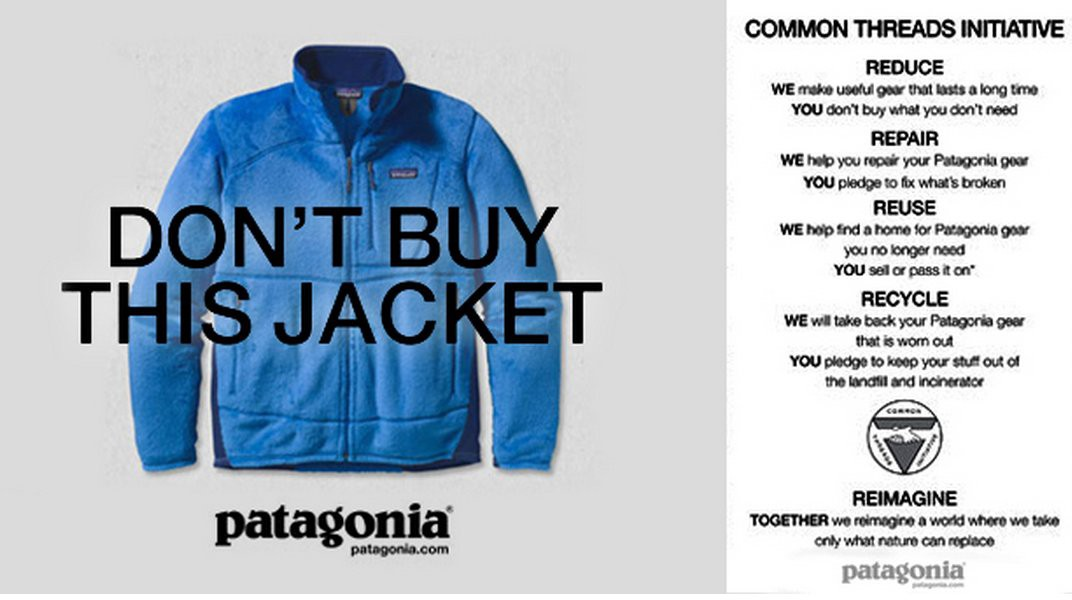 Patagonia have a history of running Black Friday campaigns which go against the norm. Having previously urged customers not to ‘buy this jacket’ and then going on to see a rise in sales, they decided to maximise the amount of good they could achieve on Black Friday.

In 2016 Patagonia ran a campaign promising to donate 100% of sales on Black Friday to grassroots environmental groups. Not 100% of profit, but actually 100% of all the money paid for the item. 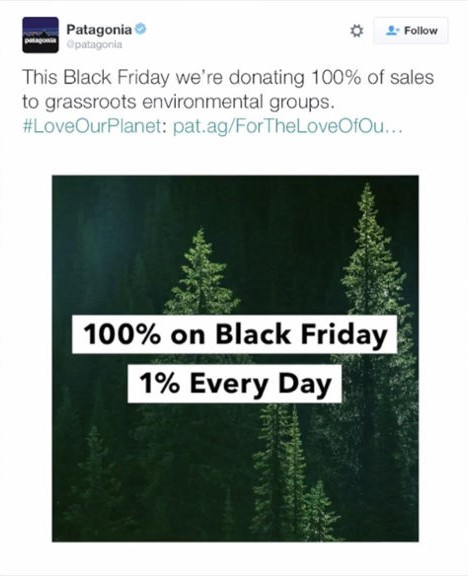 Patagonia would usually expect to achieve $1.5 to $2 million in sales on a typical Black Friday. However, they factored in the promotion and forecast sales of $3.5 million. The end result was somewhat more spectacular and blew that estimate away on every front: 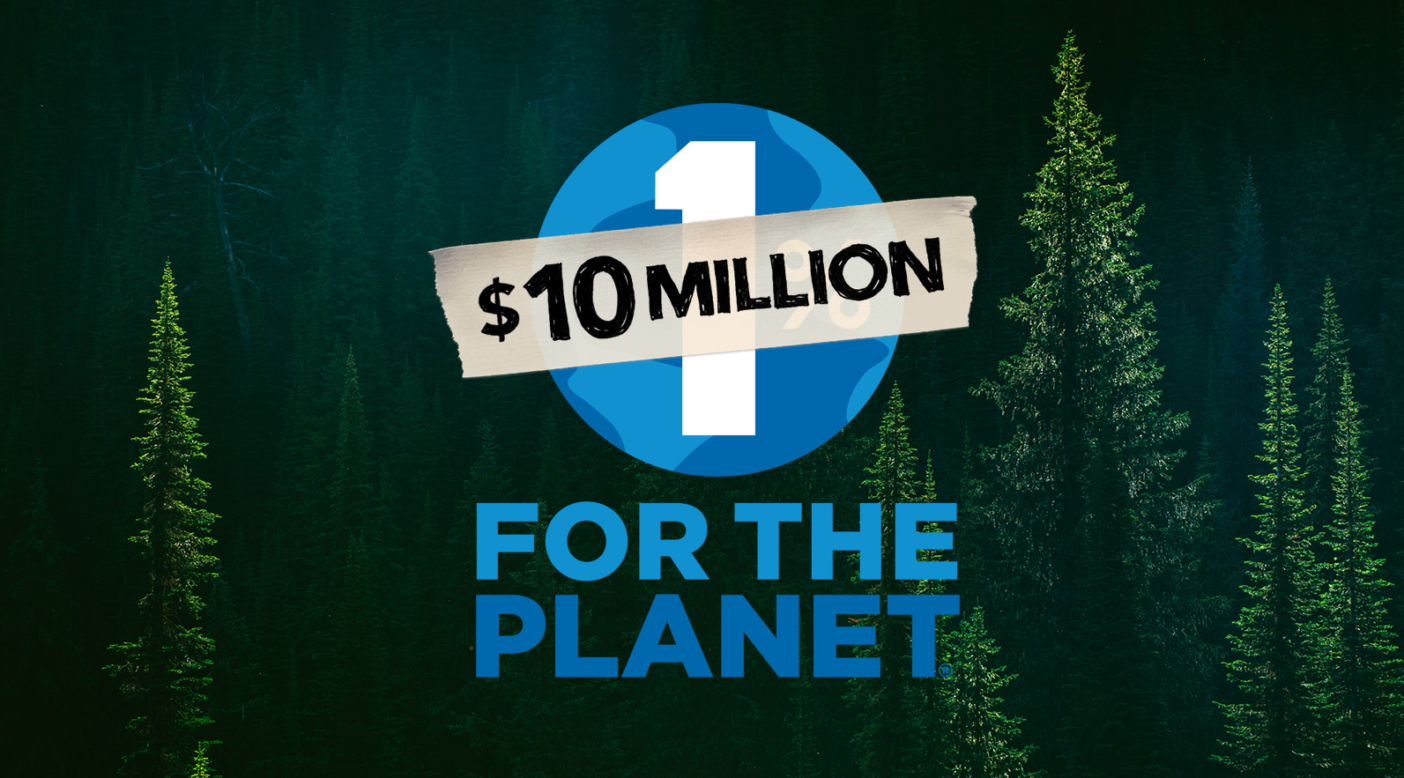 I couldn’t find any data on what the sales surrounding Black Friday were for Patagonia, but we know that sales throughout Cyber Week will outstrip those achieved on Black Friday alone. It is, however, it’s hard to know if the additional sales and exposure would have outstripped the number of customers who specifically purchased from them because of that offer and would not purchase again. Especially as over 70% of shoppers were first time buyers.

What we do know is that Patagonia offered something completely different and authentic in the face of the normal consumerism driven Black Friday advertising and it was incredibly effective. The key here is authenticity, it was an offer that perfectly fitted their brand and a message that their audience wanted to spread.

Cards Against Humanity has a youthful and cheeky brand image, which matches their product. They are sometimes looking to shock their audience and also just see what they can get away with.

Each year they run a Black Friday promotion or ‘prank’ which is usually the opposite of what you would expect.

This year we offered our customers the ultimate Black Friday experience - the ability to buy nothing from us for $5. We took our entire store offline, and put up a simple payment form where people could give us $5.

Cards Against Humanity is known for our charitable fundraising - since 2012 we've raised nearly $4 million for organizations we love like Worldbuilders, the Sunlight Foundation, the EFF, DonorsChoose.org, the Wikimedia Foundation, and the Chicago Design Museum. We even started a $500,000 full-ride scholarship for women getting degrees in science.

There's been a lot of speculation about how we would spend the money from Black Friday, and we're happy to announce that this time, we kept it all.

Last year they chose to run a campaign giving people the opportunity to donate $15 to ‘save America’ which included ‘destroying homework’ and ‘saving baseball’.

Campaigns like this, or the time they raised the price of their product on Black Friday and still saw an increase in sales, work because they are authentic to the brand and so resonate with the audience. 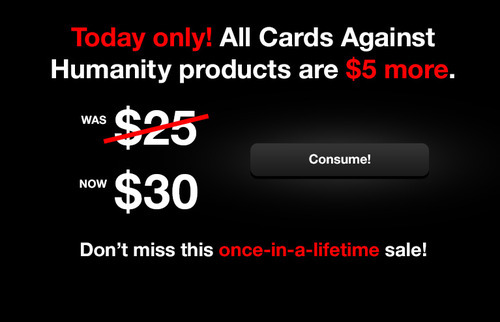 Once again it’s flying in the face of the usual Black Friday campaigns, and doing it in a way that people who are likely to buy their product will want to share. It stands out super strongly from what everyone else is doing.

Sometimes it’s just about really getting yourself noticed. Which is what Quirky.com did in 2017 with this big, bold and heavily animated email campaign.

They led their email campaign with a great offer and really strong imagery to back it up. The heavy use of animation ensures it stands out from everything else in your inbox.

Ultimately Black Friday is a time where consumers are ready to part with their cash, reflected in the rise in traffic and conversion rates. But in order to make sure it’s your brand they are converting with you need to be doing something bold to capture that traffic in the first place.

Owen Powis Published this article 15 Nov, 2018
Owen Powis is the CEO at Wordtracker and has spent his career working in the digital marketing sector. That time has been spent working at some of the UK's largest agencies dealing with clients ranging from SMEs to large blue chip organisations. With hands on experience ‘at the coal face’, multi-channel marketing is of particular interest, with a long-running bias towards SEO.