Posted by Edith MacLeod on 7 Sep, 2022
View comments Search News
The expected massive impact has failed to materialize, but there is some evidence of the worst offenders being hit. 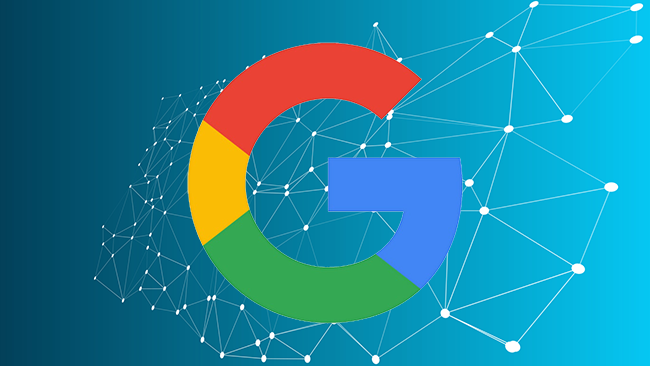 When Google announced the Helpful Content update, it was clear this was a big deal. Not only was it announced beforehand, Google also had a whole Help document ready to go, to inform people about what this meant.

This made sense. Spam content has long been a problem for searchers and so also for Google. There’s a lot of it around, and Google’s update was a direct response to a form of gaming the system which has made the web worse all round. The update aims to reward content written by people for people, rather than search engines.  Effects will be site-wide and can last months, meaning the impact for an affected site could potentially be massive.

So, SEOs were bracing for a significant update, with a potentially big impact. Two weeks in, there was general puzzlement at the lack of big shifts in the rankings.

In response to comments about big effects not materialising, Google’s Danny Sullivan tweeted on 31 Aug that the update hadn’t yet finished and they were still continuing to refine how it worked.

It’s important to remember, that if your content is fine, then you have nothing to worry about. Some evidence is now emerging that the update really is targeting the worst offenders. (open tweet for graphs). 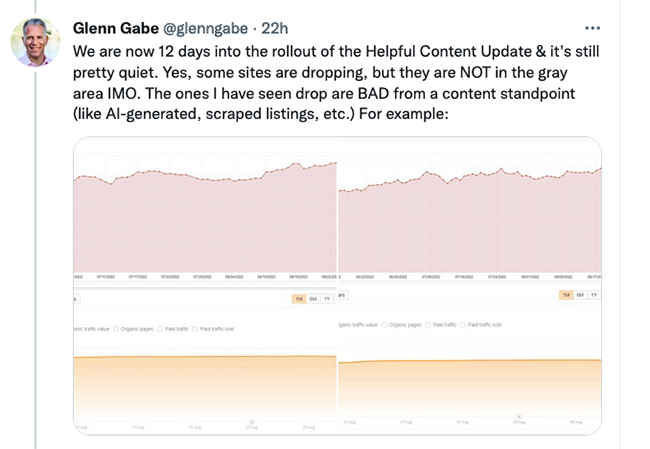 In a series of tweets, Danny Sullivan tried to clarify what we should expect from this update (and how it might differ for existing and new sites).

The bottom line is that if your site is encountering a change in traffic and trying to understand why, you should be reviewing ALL Google's guidelines and docs.

"It's checklist time. Do you follow crawling best practices? Do you have errors reported in Search Console? How are you doing with page experience? Are you doing things we advise against?...."

However, Google sometimes releases an update that produces notable and immediate results, in which case they'll issue specific guidance:

"Now sometimes, we'll rollout an update that can produce some fairly immediate and notable changes, and that's why we give share about them, to give a sense and guidance about particular issues: https://developers.google.com/search/updates/ranking"

The Helpful Content update is ongoing. A new site with unhelpful content which is spotted by the algorithm might not see a drop because it had never really gained.

"With the helpful content update, it's as we've said, an ongoing thing. If you launch some new site full of unhelpful content, it might spot that soon after launch, and the site might not see a change in traffic because it never really gains...."

In this case, going down the checklist is the thing to do, and this should also bring you to considering your content.

Danny Sullivan went on to reiterate that sites with helpful content don't need to worry, but warned that if you do have unhelpful content, Google will figure it out.

The Helpful Content update will also feed into other updates - and possibly be the factor that tips the balance on a ranking change.

This update appears not to have had the cataclysmic overall impact of some previous updates. It may be that Google's targeted approach is successful here, and it really is honing in on and tackling the problem of spammy content to manipulate rankings.

As always, it's wise to keep monitoring your rankings. We'll continue monitoring the situation from here, and report on any developments.

Edith MacLeod Published this article 7 Sep, 2022
Edith MacLeod works in Wordtracker's Community and Content team. With a background in languages, in previous roles she has worked as a translator and interpreter and as a news editor, before moving into the world of SEO.

How long does it take to rank in Google? [infographic]

Posted by Wordtracker on 7 September 2022

Posted by Lilach Bullock on 4 September 2022

Google opens up LaMDA for testing