Google has announced the creation of a new video ad format for AdWords to extend the reach of video ads beyond YouTube. Outstream Ads is a new format designed exclusively for mobile and will operate across Google video partner mobile sites and apps.

Unlike TrueView for reach or Bumper ads, the new format doesn’t need a placement in YouTube, which is the big change here.

Outstream video ads will start to play without sound once they appear. Users can then tap to turn the sounds on, restart the video or just keep scrolling on.

More details are available in Google’s blog post and in AdWords help.

Google has another go at solving its messaging app problem 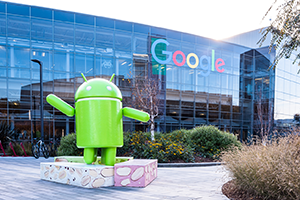 A long standing problem of Google’s is the lack of a messaging service to rival the likes of Facebook Messenger, WhatsApp or Apple’s iMessage.

Now Google has announced Chat, a new messaging system designed for Android smartphones, which it hopes will make the messaging experience on Android good enough to compete with the current big players.

Chat is not a separate downloadable app, but is based on RCS (rich communication services), a successor to SMS. The aim is to take the universality of SMS – anyone with a phone can send a message to anyone else with a phone, without needing a specific account or app – and update it with all the features of a modern chat service.

Google’s previous attempts to beat Facebook and Apple’s messenger apps have fallen short. This initiative, which has the backing of leading phone operators and is based around a system already used by millions, may be its best chance of breaking into the messaging space.

Google owner Alphabet has announced soaring profits for the first quarter on the back of strong advertising sales. The growth figure of almost 73% (totalling around $9.4bn) exceeded expectations and comes at a turbulent time and despite investor concerns around the effect of new EU privacy rules on Google’s business model.

The EU’s General Data Protection Regulation (GDPR) comes into effect next month. It gives individuals greater control over the use of their data and may prompt users to reject receiving personalised ads online, hitting Google sales. In addition, there are rising concerns around data collection by tech giants Google and Facebook, sparking threats of regulation in Washington.

Wordtracker Published this article 24 Apr, 2018
We provide information and education, keyword research and digital marketing apps, as well as support and help when you need it.